Thanksgiving Dinner in a Bowl

Here's what I had for Thanksgiving dinner: 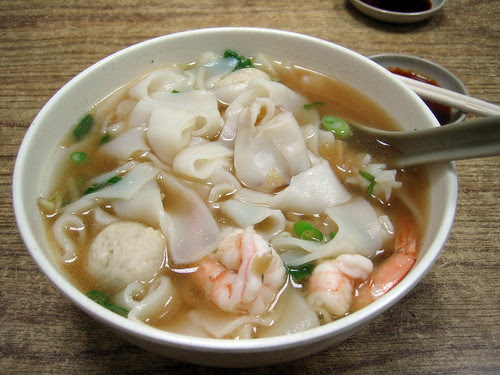 I'd left Virginia just before 8 on Thursday morning. It was a little later start than I wanted, but considering that I'd gotten in at 1:30am the night before (after the Beach Shack's "pulling up stakes for Falls Church" party), it was probably for the best.

It was spitting down rain most of the drive up, but nothing too bad. There was some brief slowness in Delaware (as expected), but the worst part was two big slowdowns at the New Jersey Turnpike.

Still, it only took me four and half hours, all told.

Since Mom is in Taiwan right now, and my sister was with her fiancé's family, my Dad & I bagged on the traditional Thanksgiving dinner and trained in to Chinatown for some noodles at some of his usual spots.

As we were waiting on the station platform, there was a recorded message: "The scheduled 1:05 train has been canceled." We headed back to the car to go home to wait an hour for the next one, when the train pulled into the station. Guess you can't believe everything you hear.

We got to the World Trade Center PATH and walked to Chinatown. It was raining just enough to be annoying.

There have a few Calder stabiles around City Hall Park: 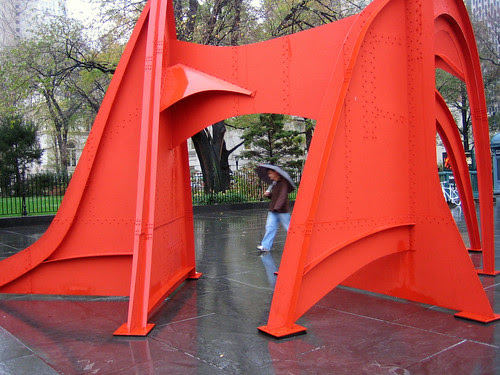 The brightest spot of color on a gray day.

Here's a pedestrian marker in the sidewalk near City Hall: 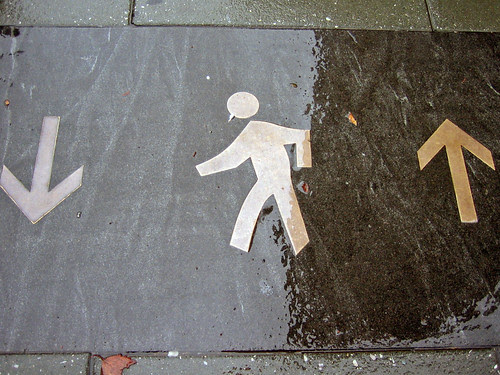 And, this is some sort of Herve Villechaize-meme sticker thing at the playground in Chinatown: 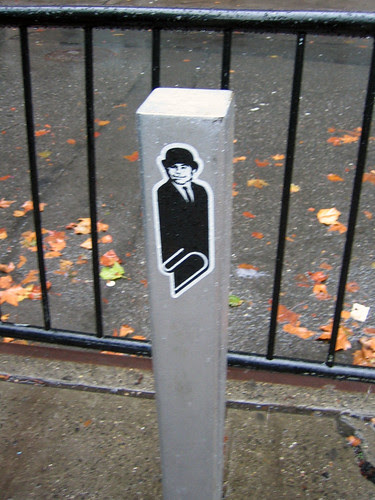 So, we went to the noodle shop and had seafood noodle soup, which hit the spot on a cold, rainy day.

Then we went to a few other shops (everything like clockwork -- my parents hit the same spots so regularly, there's practically a groove in the sidewalk), then headed back for home. (It was too nasty out to do much other walking around.)

So it was a good Thanksgiving, just me and my dad: 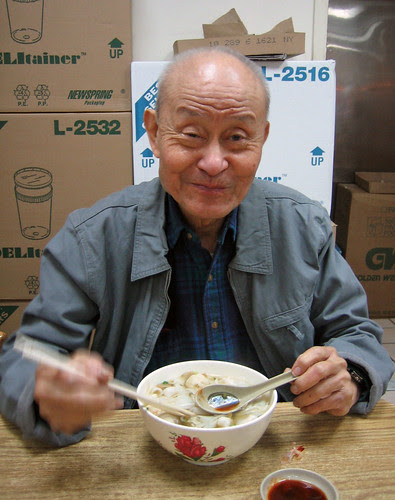 Ah, memories of midnight runs from L.I. to Hop Kee or Wo Hop for roast pork lo mein, and seeing how fast we could make it home at 3 a.m. in the Caddy that my friend inherited from his mom & to which he affixed a Grateful Dead sticker. I think our record was 18 mins., but sometimes we hit traffic jams in the city that never sleeps.

Your dad is adorable. I want to give him a hug.

Yum! You need to give me the name of that noodle shop so I can visit the next time I'm in NY.

Matt: We used to go to Hop Kee all the time.
Nuggets: I will have to give him a hug from you, leaving out the whole blog thing, since he really doesn't get it. Or care to.
Jamy: The noodle shop is Bo Ky (which is not closed, despite what NY Magazine says); we also picked up a few things at New Malaysia Restaurant. -- Joe

Thanks! I'm going to try and get to Chinatown the next time I'm in the area.