The Nutcracker Wears ACUs and Oakleys

I was in Target yesterday. There were a few remnants of Halloween stuff clinging to the shelves, but the employees were already setting up Christmas displays. 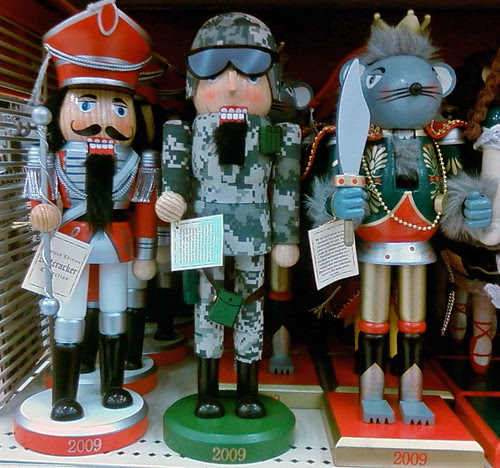 I took a quick look at the DARPA Network Challenge site (on December 5th, they'll fly ten red 8-foot diameter moored weather balloons; the first person to register the locations of all ten will win $40,000). Also, I read the rules (which I'm not sure very many commenters have bothered to do yet, since they're in PDF), so here are a few thoughts:

* As currently structured, it's obviously a problem in game theory, behavioral economics, and group collaboration, not technology. Contestants will register as individuals, not organizations -- of course, people will collude and collaborate, but they'll have to determine not only mechanisms for intaking, validating, filtering, and crediting distributed reports (your basic crowdsourcing problems), but they'll also have to figure out the basis for distributing the prize. (And $40,000 is in the realm of "real money.")

Presumably, a large enough group to win will be in it for the bragging rights (I'm sure everyone is thinking "Anonymous"), and simply donate the money to charity, to avoid all those messy distribution issues.

However, since the registrant has to be an individual, the winner of record will still get stuck with the tax on the $40K prize, even if they donate it all to charity. Something to consider.

* The rules are only two pages right now. I'd be really surprised if the rules (which "may be modified at any time without notice") don't iterate and grow dramatically in between now and December.

Of particular concern is the potential griefing issue -- anyone with any modicum of deviousness has already said, "Hey, we should just fly a bunch of fake weather balloons to fuck up everyone else."

(The rules state that official balloons will be accompanied by DARPA representatives -- we're going to need some authentication method beyond "Some asshole wearing a navy blue polo shirt holding a clipboard." It'll have to be communicated far enough ahead of time to propagate, but not so far in advance to be easily spoofed.)

Griefing goes to the idea of motivation: You might not be able to mobilize and organize an credible nationwide team to win, but I can easily see groups of griefers -- call them "cells" -- popping up on game day:

Looking at costs, an 8-foot diameter balloon holds about 270 cubic feet of helium; with cost of balloon and tank rental, that's a few hundred bucks, which is easily spread across a few friends.

* Hopefully, no one will try shooting down balloons. That would be a bit much (as well as a violation of the contest rules). The rules cover changed locations, but I don't yet see anything about accidental or manmade balloon failure post-launch.

As to other potential hurdles (balloons in really out-of-the-way -- but still road accessible -- locations, I don't find that as interesting as the challenge of dealing with griefers, especially highly-motivated ones bent on undermining the game.

Of course, since no one ever accused DARPA of being dumb, it really depends on how they implement the Web site reporting mechanism (will it provide feedback when you submit a location, etc.)

For the past few weeks, I'd been fretting about my lack of a good Halloween costume concept (last year's costume raised expectations by an unreasonable amount). Some rejected concepts:

* An ATM machine. To do it right (by my thinking), it'd have to be fully enclosed, which might make for a good costume, but doesn't sound like any fun to wear. Tabled for next year, maybe.

* Office Supply Guy. I was thinking paper-clip chain mail vest, maybe an "Easy" button and some strategically-placed Post-Its. Abandoned after determining that paper clips tangle, snag and detach, making them unsuitable for construction.

* Balloon Boy. Considered it for the briefest of moments. Even if I could do a better one than all the half-assed ones I expect to see this year (which is questionable), it seems lame.

* Chinese Drywall. Simple to build, but as previously mentioned, I don't like wordplay costumes.

* Jon Gosselin. Another brief consideration. Would have only done it if I could have rigged up 8 dolls on a harness, though I guess that's mooted now. Plus, I didn't want to buy an Ed Hardy t-shirt.

Then I got sick. (Still am, really.) It's either the flu or a sinus infection. Nothing too serious, but seeing as how my major accomplishments this week have been sweating (also sneezing), I no longer care about a silly costume, I just want to stop being sick.

So assuming I'm healthy enough for Halloween, my fallback will probably be jumpsuit-based (again), quite possibly the getup I used for this year's Baltimore Kinetic Sculpture Race. Which was coincidentally swine-flu themed, so I guess it could work out.

Tags: halloween, costumes, jumpsuits
Posted by Joelogon at 10/29/2009 No comments: Links to this post

Documenting My Gradual Shift to the Left

For the past few years, I've been rocking the center hair part.

However, recently, my part has been migrating back to its natural part, towards the left: 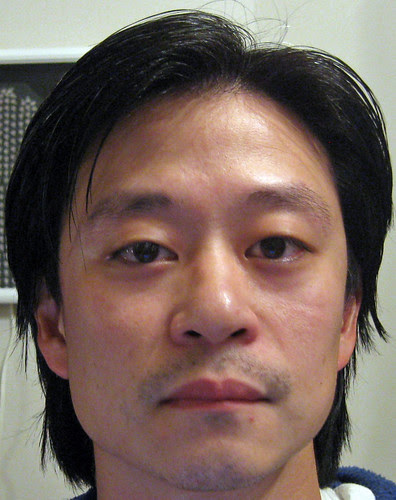 Tags: joelogon, self-portrait
Posted by Joelogon at 10/15/2009 No comments: Links to this post

Dumb Gym I Have Done Lately

I jacked my back a little yesterday as I tend to do occasionally, leaning too far forward while doing a warmup set of squats. (Somewhat ironically, I'd been concentrating on my foot position to keep my right knee happy, and didn't pay enough attention to my back posture.)

Since you can't really train around a lower back strain, it looks like I'll be taking it easy and hitting the reset button by eating pre-Halloween candy for a week or so. But it's not too much of a major loss -- after 8 weeks of medium sets (well, ostensibly medium -- when I plateau, my medium sets of 10 top out looking a lot like my heavy sets of 5), it was time to switch back to light sets of 20, anyway.

It does mean that I'll have to cut back on my eating. I'm at about 141 now, whereas my natural tendency is about 5-10 pounds lighter. (I enjoy the medium and heavy phases, since I get to eat more, even if it ends up mostly being granola bars, egg whites, and badly-prepared chicken -- as previously noted, I don't go the whole "brown rice, steamed vegetables, and chicken breast" route -- I could probably do a lot better if I was stricter about my diet, but I guess I just don't care that much.)

In terms of physique ("buffitude," not anything like functional strength), I'm probably at my all-time best right now. (You're going to have to trust me on this.) My bench press is over 200 pounds (machine weights, not free, but still), whereas previously I'd never been able to get past that.

Cardio-wise, though, I think I hit my peak my sophomore year of high school (JV soccer) -- since then, no matter how much I try (which, admittedly, hasn't been all that consistently), I don't manage to get any better, and in fact, probably keep getting worse.

Since I'll be on the sidelines for a week or so, popping Advil and blogging on my back, here are a few observations from the gym, which I think are fairly universal:
Lastly, perhaps this is a suburban thing, but some folks are really trusting about not using padlocks -- at all -- on their lockers. I know that your typical gym padlock is trivially easy to shim open, but at least it shows you're trying.

Tags: gym, workouts, locker rooms
Posted by Joelogon at 10/13/2009 No comments: Links to this post

Not sure what I'm doing tonight. Tomorrow, though (Saturday, 10/3), presents us with choice paralysis a-plenty:

* The Dulles Day Plane Pull is from 11am-4pm. The plane pulling bit is fun to watch (and sometimes teams need spectator help), as well as the aircraft display. (See my photos from 2007; 2008 was canceled due to heavy rain, which doesn't look like it'll be a problem this year.)

* The Crafty Bastards craft show-thing is in Adams Morgan, from 10-4pm. If I go, it will be to maybe get a t-shirt, but definitely a falafel.

* I'm not 100% on this, but I'm pretty sure I saw a sign in the median on Reston Parkway for the Fairfax County Police Department Reston District Station Open House, 11am-3pm?

The kicker is that the Fell's Point Fun Festival is also both days this weekend. (Although I pretty much have to stay local Sunday to do some painting, which rules that day out.)

I'm a little leery of driving up to Baltimore after what happened the last time, though it's fun, even if you just end up hanging out in the beer garden (nee parking lot) and not moving. I'm pretty much leaning to the purely local stuff.

Looking out a bit further:

* The Reston Oktoberfest is Oct. 9-11 in the Town Center.

* Wednesday, Oct. 14 is both the October Washington Blogger Meetup at Madam's Organ in Adams Morgan. I was originally a maybe on this, because Cowboy Junkies are playing the Barns at Wolf Trap, but it looks like they're sold out. Yay for indecision!

* The PublicMediaCamp unconference is Oct. 17-18 at American University.

* The final BlogPotomac is October 23. I am as yet undecided, though I suppose I should decide quickly.

As for Halloween, I have no idea what to do for a costume, which would be a big letdown after last year. I will have to do some thinking.

November brings BarCamp DC and CrisisCamp NYC, but one month at a time.
Posted by Joelogon at 10/02/2009 No comments: Links to this post