More Kickball Footage: Still Not Getting Any Better at This Video Thing

Had some offline time this weekend, so I was catching up on some photos and videos. Here's a quick clip from a kickball game on 5/21, notable for a sexy play at home (Please excuse the cameraman's hooting.):

We won the game pretty handily.

The next video is from 6/11 -- we were short-handed, but after a back and forth effort, we went into the bottom of the 6th down by a couple of runs. Somehow, we managed to pull off a win:

This particular video, I finally stopped using the Fade to White transition and moved to the Cross Dissolve. (This was a big step for me.)

Also, even though the camera shake is pretty minimal (well, except for the part where I was laughing because Dennis baited a fielder into making a play for him, so Michelle could get home), I didn't use any of the homemade Fig Rigs or Poor Man's Steadycams or anything -- just held the camera carefully.

One of these days, I'll invest in a real digital camcorder. As well as figure out how to optimize the file export settings -- I'm still not happy with the quality, especially after YouTube gets done with it.

I don't usually pay attention to the ads on my Facebook profile, and they're pretty easy to ignore. But this one stood out: Not only because of the mistargeting (Christian singles is pretty far off the mark), but because it features a model with huge tracts of Bible: 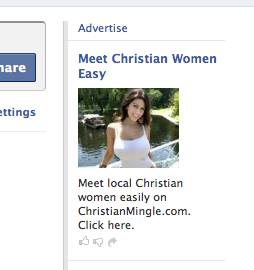 Then I realized that I'd seen this particular particularly pneumatic model before -- she's busty glamour model Denise Milani (she works non-nude -- barely -- but I wouldn't call the site SFW) and she's a former SportsbyBrooks girl.

While it's possible, of course, that Denise Milani is a fine, upstanding Christian woman, and that her photo was licensed to this particular Christian singles site, it seems far more likely that whoever was responsible for the ad -- either the site or an affiliate -- just grabbed an eye-catching photo off the Web. *yoink*

Seems to be standard operating procedure for any dating site ads on Facebook, whether it's over 30s, Christian, or whatever -- find a pretty girl whose boobs take up 40% of the available image area. (Actually, I guess that's the SOP for pretty much any Facebook ad.)

I actually did click through to take a look at their site. (Their slogan is "The Community for [Busty] Christian Singles.")

It has a lot to offer -- for example, it has a wonderfully streamlined registration process. For example, it asks your gender, but doesn't ask what gender you're seeking. Simple!

Cameraphone pic of a frozen touchscreen kiosk at the Harris Teeter: 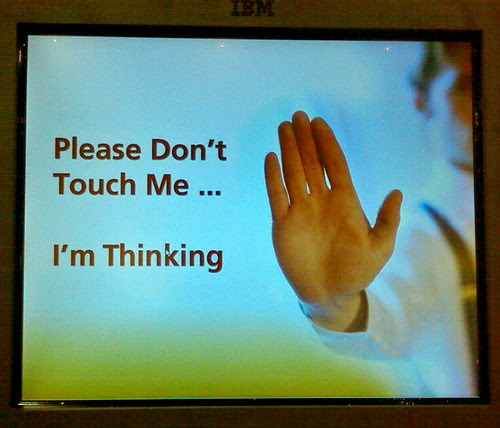 Why Yes, the AOL Time Warner Retirement Plan IS Administered by "PunkRocks"

Here's the most ridiculous AOL employee password phishing e-mail ever. (The fact that I got it also shows the phisher is working off an old internal employee list and only adds to the ridiculousness):

The depression has struck the entire nation, including us here at AOL Time Warner. Some associates may no longer be eligible for retirement plans. As the depression locks its grip on us in an unstable fashion, and we spiral toward financial disaster, there is little to do other than ride out the storm and hope for the best.

5,000 employees are no longer eligible for retirement.

To find out if your plan has been canceled, please do the following:

1. Instant Message the AIM BOT Screen Name "PunkRocks" and login to the system by IMing your credentials in this format: [ScreenName][Password][SecurityCode]
2. Your updated retirement plan file will be pulled up and displayed for your viewing.

Remember: Your plan MAY still be active. You MUST Instant Message "PunkRocks" with the above information to verify.

We apologize and have no further information at this time,
AOL Time Warner

Outside of the purpleness of the prose and the ludicrousness of the idea of an "AOL Time Warner" retirement, a few comments:
On my inaugural Facepalm Scale, I give it a five out of five -- the highest possible score! Congratulations!

Tags: security, phishing
Posted by Joelogon at 6/05/2009 5 comments: Links to this post