During the Great Famine, we learned that a Burger King ketchup packet has 10 calories. It's enough to keep an 180 pound man alive for about 60 seconds. Of course, by then, there weren't very many 180 pound men.

A Taco Bell hot sauce packet only has 2 calories.


Some people believed that the end of the Mayan calendar in 2012 presaged the apocalypse.

We now can call those people out for what they were: Wildly, irredeemably, laughably optimistic.

As we huddle down below in our underground warrens, eking out our meager existence under the iron rule of unseen yet all-seeing authoritarian rulers, hiding from the radiation-soaked landscape that, paradoxically, is the only thing keeping us alive by holding the nanobiotic death clouds at bay, we can only wonder: How did all this happen?

When the al Qaeda suicide bomber detonated his radiological dirty bomb, we had no idea that the resulting chaos would guarantee that a 12.5-meter-wide meteor would slip silently past our laughably meager Spacewatch efforts and explode over Europe. The resulting electromagnetic pulse disrupted the safeguards of the Large Hadron Collider at a critical juncture, causing the creation of micro black hole, which lasted long enough before dissipating to pass through the earth's core, emerging in a remote island, notable only to those cleared to know about the secure bioweapons research and storage facility it housed.

The resulting explosion ejected an unholy and unknown melange of fearsome, genetically-engineered biological agents into the atmosphere. The ensuing plagues caused interlocking waves of pandemics, creating an omnidemic that devastated the global population.

Desperate to stave off extinction, researchers unleashed a nanobiotic countermeasure, whose networked, emergent intelligence first targeted the bioagent, then its vectors, then in cold machine logic, potential hosts.

In a perverse utilization of resources, the nanobiotic agent first converted human carriers into what can only be called zombies. Within days, though, the infection and exsanguination method of the now-cybernetic killers quickly evolved from clawing, tearing and biting, to a far more efficient method of host elimination, where moments after the first lungful of nanomachines would explode the victim into a wet, melted mess of red gore and grey goo.

In perhaps the only bit of luck humanity experienced (if one can call thermonuclear annihiliation "luck"), a few warring countries unleashed their arsenals in a vain, spiteful settling of final scores, leading to the discovery that the high levels of radiation were the only thing to give the nanobiotics pause.

The ensuing retreat to subterranean shelters under the cover of nuclear self-immolation was enough to keep humanity angstroms from the abyss. Though even if the nanobiotics can be beaten, the surface world remains a toxic, radioactive wasteland of under the cold, dim light of nuclear winter.
Posted by Joelogon at 12/30/2010 2 comments:

I needed to buy glue sticks for my hot glue gun because I'm either out or they're hiding from me. (Yes, I own a hot glue gun. No, it's not a Bedazzler; those are completely different.)

The reason for this is that over the Christmas holiday, my mom decided to wash my sneakers. (Yes, my mom still washes my sneakers. You try stopping her.) After the wash, the rubber soles separated completely from the foam.

I went to the craft store (Michael's), and grabbed some glue sticks before going to the gym, which is in the same complex. When I got home, I realized that I bought the wrong diameter glue sticks. (Tip: Glue sticks come in different sizes.)

Of course, I'd thrown out the receipt, so when I went to exchange them, I was hit with a 20% restocking fee (or whatever -- it's stupid tax), which worked out to about 60 cents.

Anyway, the kicker is that subsequent research suggests that hot glue probably isn't the best choice for the task.

Anyone need anything hot-glued?
Posted by Joelogon at 12/29/2010 No comments:

1. I was going to go to the gym tonight, but I got out of work really late. (By the way, if you're a cleared company with experience in satcom hardware and want to team on the $19.5 billion Army CTS procurement, you should probably go to this event on Tuesday.)

It was probably for the best, because... well, let's trace this back:
2. On top of that, I was thrilled to find out that I had a Gawker commenting account that was affected by the data breach. (I checked the whole hash thing, but there's only one joelogon.com domain on the list.) I had completely forgotten I'd had one set up, probably from trying to post a Gawker or Valleywag comment that never got approved years ago. The password on that account was only moderately strong, but at least it wasn't a dictionary word, unlike certain feds we'll find out about soon.

3. And over the past few weeks, some idiot spammer has been forging a return address header from joelogon.com for their stupid diploma mill emails, which has been really irritating. The number has a 301 area code -- I'm considering calling it.
Posted by Joelogon at 12/14/2010 No comments:

I was listening to an NPR Morning Edition interview with the author of an upcoming New Yorker story, Inside WikiLeaks.

Maybe I'm just extra-cranky because I had to get up early to head over to Bethesda for an event (though the drive in was trouble-free), but three things really bugged me about interviewee Raffi Khatchadourian

Parts of New Jersey Really Do Look Like "New Jersey"

View driving back after Thanksgiving, past the Bayway Refinery off 278 and exit 13 of the NJ Turnpike: 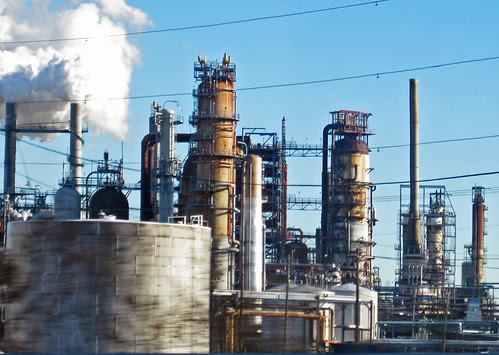 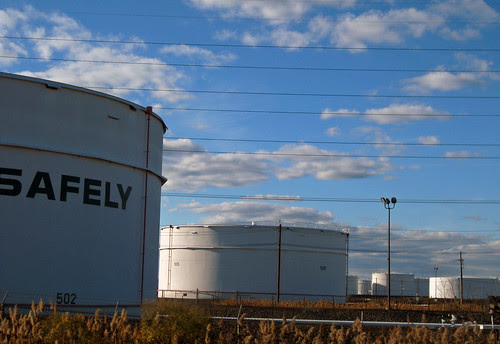