I'm taking this holiday break to whittle down my "Papers to Be Read" folder. (It's a topic I brought up in a NetSol blog post a few months back, Book Shame, Information Hoarding and Aspirational PDFs, about how our publicly-shared reading lists are often more aspirational than an indicator of intent.)

It's more than a little telling that I only just now added a "Read" subfolder (as in "Papers I've Actually Read"). At this point, many of the documents have been superceded and now only have value as snapshots of particular moments in history.

The first one was basically a warm-up: Speculative Fiction and National Security, a 7-pager by Adam Elkus and Crispin Burke (Starbuck, of Wings Over Iraq) for Small Wars Journal. It's fairly light look at the framework (mostly limitations) of speculative fiction and the scenarios depicted in futurism and sci-fi, concluding that their primary value isn't necessarily predictive, but instead as a way to get people to think about present problems in a different and perhaps more honest way -- because situations are presented in a fictionalized and more abstract context, we're able to look at things with fewer of our current investments and hang-ups.

The second is a lot lengthier, if not necessarily deeper: Integrating Security:
Preparing for the National Security Threats of the 21st Century, a report from the Center for American Progress that came out a few weeks ago. It's a 60-something page recommendation for the Obama administration's National Security Strategy.

It deals in broad strategic strokes (e.g. combating extremism, engaging with adversaries, leveraging alliances), a fair amount of Bush-bashing, and also features many recommendations for bureaucratic reorganization and synchronization that will never see the light of day.

While I agree largely with the goals and methods outlined in the report, it lacks oomph. The report features nuance, deliberation, multilateralism, and an emphasis on what some call "soft power," -- non-military diplomatic and development solutions -- so it's severely disadvantaged by lacking the visceral simplicity of who to bomb next and how to better blow shit up.

("Soft power" is instantly weakened by the word "soft" -- there needs to be a better phrase. "Non-kinetic" is great, but that's really best used by the military. And improving the capabilities of governments is difficult and unsexy, even though we know that helping governments deliver essential services, especially in times of crises, is important in showing their effectiveness and keeping people from getting drawn to radical non-state actors that can get the job done.)

Also, on one hand, it does decry the militarization of stability operations and nation-building, while recognizing that in places like Afghanistan, they're sometimes the only folks who can get the job done (due to both security considerations and manpower and logistic concerns.)

The report seems to put a lot of weight into quadrennial reviews for the Department of Homeland Security and the State Department, though from what I've heard (and I'm pretty far out of the loop), I've heard that the DoD's QDR is pretty much a pointless tail-chase exercise.

Personally, the report could use a little more punch, something to make key recommendations more accessible and sound biteable. The report gets pretty bogged down in bureaucratic restructure-ese, whereas I think (for example) that they could have wrapped up their international development bullets under the banner of a "Marshall Plan for Anti-Extremism." (Sure, the metaphor only goes so far, but it's accessible.)

It's pretty apparent that for the bulk of my career now, I've been too close to the marketing folks, and too far from the policy wonks.

Anyway, I'll keep working down into the pile and then see what bubbles up.

Notes From the Road

Got a late start tonight, leaving at a little after 9pm. I doing really, really well for the first 90 minutes or so, but then got hit by a corollary of Joelogon's Theorem of Turnpike Conservation, and I got slammed at the Tydings Memorial Bridge, where an accident earlier in the day combined with the usual toll plaza backup knocked me off schedule.

After that cleared out, there were the remnants of another accident at around exit 100 (the highway displays warned of 2 left lane closures, but all lanes were open by the time I passed through).

The only other trouble was that it got really foggy in spots. I kind of liked it -- the fog wrapped everything in softness and made it look ethereal . Going over the Delaware Memorial Bridge, you couldn't see anything off to the sides.

Driving visibility wasn't that much worse since taillights get that halo effect, and with the lights in the fog, I could pretend I was re-enacting the Battle of the Mutara Nebula from Wrath of Khan. (No, not really. Well, maybe a little.)

For music, even though I have an iPod again, I still had to jury-rig my laptop into a really big iPod. This is because my car's cassette deck died a few weeks ago, and without it, I have no way to play my iPod through the speakers. So I was listening through my laptop's speakers, which worked out about as well as you might expect (that is, good for listening to songs you already know by heart).

I also heard a good stretch of programming from WPRB 103.3, the Princeton University station, which I'd never heard before (it's just out of reach from home).

The Terra Cotta Warriors exhibition at the National Geographic Museum opened last week. I don't have any plans to go, because (I don't get to be travel snob very often, so I'm going to savor this) I saw the real deal, the whole shebang, in Xi'an, during a trip to China in 2003.

It was a family trip, as well as a group tour, so it's not like I have much to be snobby about.

To celebrate the exhibition's arrival in DC, I dusted off my official, made in China and bought in Xi'an, souvenir miniature terra cotta warriors, no doubt made with the finest locally-sourced lead and arsenic-tainted industrial byproducts available: 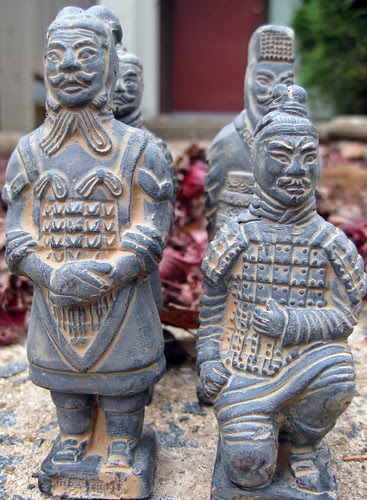 The set started changing color pretty much immediately after purchase. I'm actually surprised that they haven't crumbled yet. 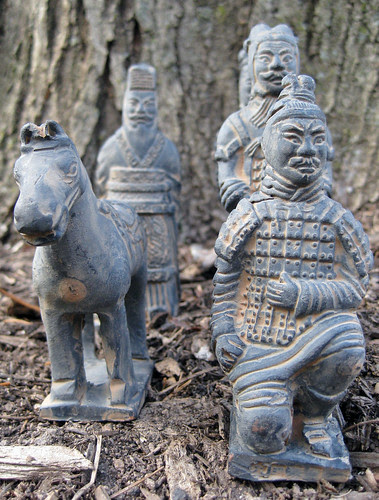 Okay, back into the box. I Have No Idea What You're Talking About, so Here's a Picture of Me Wearing a Finnish Gas Mask 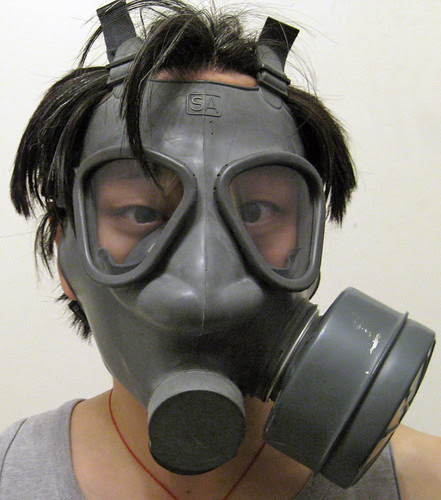 $10 at Cheaper Than Dirt. "New Condition Protect Against Airborne Virus and Bacteria -Flu Pandamic [sic]"... nope, no fearmongering there or anything.

The included carrying case is pretty nice (though the material is a bit thin), if you're looking for something to satisfy your ironic military-surplus hipster/artist pose while you convert the mask for fetish play: 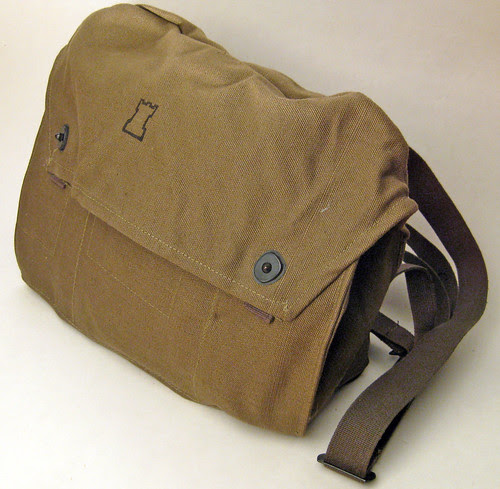 If you have something against the Finns, there's also a Czech gas mask for $7.50.

I Coughed So Hard, I Broke My Back

This morning, I was going through my usual cold weather coughing jag (it's an extremely pleasant and attractive sound), only this one had an extra kick because of my leftover cold. So it was especially emphatic.

It got so bad I thought I might actually yarf, when all of a sudden, I felt a sharp pain in my back, just like when I occasionally mess up my back doing squats, only it was worse. It was so unexpected, I fell over and hit the floor. Literally.

I get knocked down, but I get up again, and I made it through the entire day (with minimal whining on Twitter), and now I'm flat on my back with my knees up, popping whatever NSAIDs I can mix with alcohol, and catching up on reading, TV and writing. (I'd have watched the second episode of V, the better to form an opinion of it, except it's not on the ABC site yet.)

I'm still going to go to barcampdc tomorrow, though. Hopefully it won't slow me down too much.
Posted by Joelogon at 11/13/2009 1 comment: