On Turning 40 and Adjusting My Goals Downward

I turn 40 next Monday, and my still-somewhat-misnamed Actual 40th Birthday Commemoration is this Saturday (March 24, 9pm, Jimmy's Old Town Tavern in Herndon if you're interested). 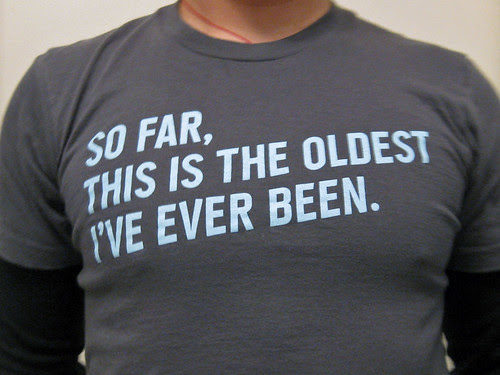 Two weeks ago, I had in mind the goal of getting down from my current weight (about 142), to my driver's license weight (well, the weight that I was when I last renewed my license, 5 years ago), which was about 130... by my birthday.

The problem with that was, I'd last been on a weight gain workout cycle, followed by three months of not going to the gym.

Also, there was St. Patrick's Day. And after a week of fairly rigorous exercise and slightly careful eating, I dropped a whole half-pound. So that ended fairly quickly.

Of course, I may simply be replacing fat with muscle (my belt feels like it's slightly looser so far).

Up until this point, I've always been a hard gainer -- even up until fairly recently, I'd skip a lunch or two and lose a pound of real weight.

Anyway, my revised fitness goal is to not worry about it until later.

Bisnow's Singles Schmooze is Tuesday night. Billing itself as "Two hours of Cocktails, Hors D'Oeuvres & DC's Most-Eligible Professionals," I haven't been and don't plan to.

Here's the event invitation email, presented with an unfortunate truncation, a big red box, and no further comment: 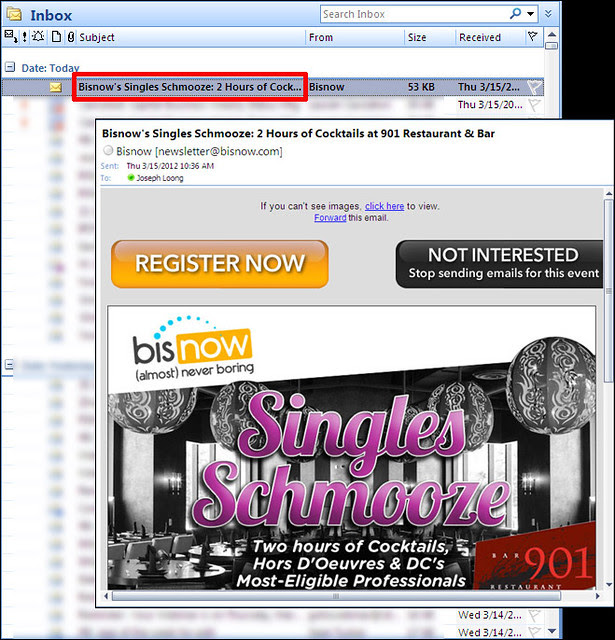 I can't attest to the accuracy of either the tagline or the subject line. Register now.
Posted by Joelogon at 3/19/2012 No comments: