Teabaggers Branch Out to Lemonade Stands

Here's a roadside "Obama Wealth Redistribution Lemonade Stand" (link from a redlit Fark thread) on the route of the RAGBRAI cross-Iowa bike ride: 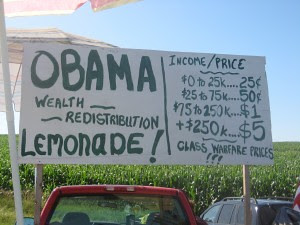 It's even spelled correctly and everything
Here's the price list (Hey, look, a valid use for a table):

Now, I was wondering what kind of tax rates this pricing scheme actually uses. Since it's a lemonade stand, I'll just use a progressive sales tax, so I don't have to muck around with marginal tax rates and all that. I hope someone else gives it a shot (I've probably already screwed up the math here.)

If the after-tax price at the lowest bracket is 25 cents, let's make the pre-tax price 24 cents, for a nice, easy 1 cent tax, or 4% sales tax. Then, we'll add the other tax brackets:

Wow, a top tax rate of nearly 2000%! What an insightful satire on the redistribution of wealth and creeping socialism. No wonder you got a mention on Hannity!

I respect smart anti-tax arguments. This is not one of them.

I don't actually think my Mac was taken over and forced to self-destruct by North Korean cyberattackers (or whoever it responsible for that bit of business), though the timing is a cute coincidence.

The Problem
On Friday night, my Macbook's hard drive died. I discovered this at about 4am as I staggered relocated from the sofa to the bed, and noticed that the screen was a shade of blue I hadn't seen before.

That was a kind of waker-upper.

I did some poking around. I couldn't get it to boot from the DVD drive, though I think that went south on me last week (refused to play a DVD movie), so that wasn't really a surprise (but it was still really inconvenient).

I was able to boot off my external Firewire drive -- Disk Utility couldn't even find the internal hard drive, so I figured it was toast. I was able to get online, though, so I made an appointment at the Apple Store the next morning and went to bed.

The Resolution
Saturday, I went to the Tyson's Apple Store (the first in the nation, lest we forget) for my 11:20 appointment. The store was pretty busy, with a line of iPhone activators (complete with an armed rent-a-cop to maintain order), but I only had to wait 5 minutes at the Genius Bar.

The tech hooked and looked at my machine. The hard drive, at only 21 months old, was indeed dead. Fortunately, even though I was outside of the warranty, they agreed to replace it (though I was on my own on the optical drive -- at $400 to fix, I decided to leave it be for now). I left the machine with them and went home, computerless, though only for a few hours -- they called later that evening and I was able to pick it up.

The Recovery
I was relatively calm through the whole process (probably overly so), since I was banking on the fact that I had a fairly recent Time Machine backup (from July 8, as it turned out) sitting on my backup drive.

I hadn't been that religious about my backups, frequently getting the "it's been 10 days since your last backup" message, and I haven't used it to migrate or restore a computer, so I guess I should have been more nervous: I would have been kind of screwed if there were any problems with the backup. But I set it to restore, then left the house to go carouse at the Town Center.

The Aftermath
Well, the combo drive is still borked, so I'm going to have to figure out what to do about that. Even if I can get a better price at a third-party repair shop, I can't really spare being without my computer for a few days, and I might be better off putting the money towards one of those fancy new unibody Macbook Pros (not sure if I'd get the 13 inch or the 15 inch). Not only would it be an upgrade, but it'd give me a little redundancy.

Somewhat ironically, I'd been on the edge of upgrading my hard drive, anyway -- I'm running a bit low on free space. I still can't feel good about that "21 months to failure thing," though.

I'm really glad that the Time Machine backup worked. I will have to be more rigorous about my backups.

Thankfully, this happened over the weekend, so I didn't have a lot of work to do. However, having a lot of my data in the cloud would have made work easier to do. I still have a long way to go (especially on consolidating and making my documents and mail accounts accessible), but it would have been workable.

Most disconcerting of all was how my routine was disrupted, and how my communications and search safety net was cut off. My phone's browser could get me through basic searches, and I've gone longer without being online, but really didn't like being forcibly disconnected.

I make a lot of noise about our dependence on technology and connections, but I'm in the same boat as everyone else. It was really uncomfortable. Must think about this some more.

July 4th, I met up with the Washington Area Roadskaters for their July 4th skate. As I twittered, we met up at the White House, moved through Georgetown, Dupont Circle, Union Station, and then to the Tidal Basin to watch the fireworks.

I also filmed the most boring skating video ever made as we made our way through the Georgetown Waterfront:

I didn't have any fancy stabilizing rigs, just held the camera at my sternum, pointed mostly straight ahead. Which is why you mostly see butts. (You know what they say: Unless you're the lead dog, the view never changes. Which is fine, if you happen to be an assman.)

Through the first part of the skate, I was sucking wind, mostly because I was feeling the aftereffects of a few of these Porch Day beverages: 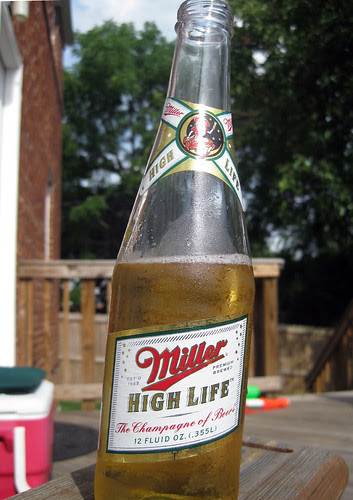 This was the first time in a long time that I wore my helmet while skating. I had a headlamp strapped to it (a River Rock 6V LED, uses 2 CR123 batteries -- got it on sale at Target) -- it's pretty powerful, with good throw and spill. It was useful to highlight road hazards, and also to let people know that I was coming.

It might have been useful for the skater ahead of me who was involved in a collision with a bicyclist as we were making our way through the crowds near the Mall, on our way down to the Tidal Basin. I didn't see what happened, but I don't think anyone was hurt.

We had a good spot on the Tidal Basin. Here's a fireworks photo: 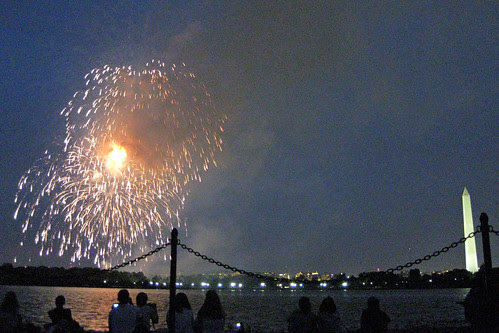 Afterwards, we headed past the Kennedy Center to Foggy Bottom. At one point, we were on one of the roads that leads onto the 66 on-ramp (I was just following the crowd) -- a cop stopped us (since they were starting to release traffic onto the road), but was nice enough to hold up traffic at one point so we could cross the median and get to the Kennedy Center. (He didn't actually do it, but I could hear the *facepalm* in his voice.)

We ended up hanging out at the outdoor patio of a TGIF for a while for food and drinks (sorely needed, as I'd been starting to cramp up).

I find it interesting how hearing a song used as part of a TV or movie soundtrack can strengthen my connection to it, or makes me appreciate it in a whole new way.

The most recent example of this was hearing The Chemical Brothers song, "Alive Alone" (vocals by Beth Orton) during a key moment in the Virtuality pilot (which I actually liked a lot). I was familiar with the song (Exit Planet Dust is an awesome album, to state the obvious), but I can't say that it had any special grip on me. But after seeing it used in the Orion drive detonation sequence (at the 50 minute mark if you watch it online), it made me like it a whole lot more.

This isn't the first time this has happened. Other times include:

* Seeing Soul Coughing's Super Bon Bon during the cold open sequence of an episode of Homicide: Life on the Streets

* When the Propellerheads' Spybreak! plays during the lobby shootout in The Matrix.

* The epic use of Inna Gadda Da Vida during the climax of Manhunter. If you know the scene, nothing more needs to be said. If you don't, well, I pity you.

If the director knows what he or she's doing with the soundtrack, the song will match the tone and content of the scene -- they're using the song to reinforce the impact of the visual and action. (And I guess it also happens with music videos, so nothing new there.) But I still find it interesting how the opposite effect occurs, whereafter you associate the song with the scene.

If you've got an example of a song that you ended up liking a whole lot more after seeing it used somewhere, feel free to share.