Ranch Dressing Is Not Supposed to Be Brown

The dressing was very brown. Naturally, I opened it. It smelled like... dust: 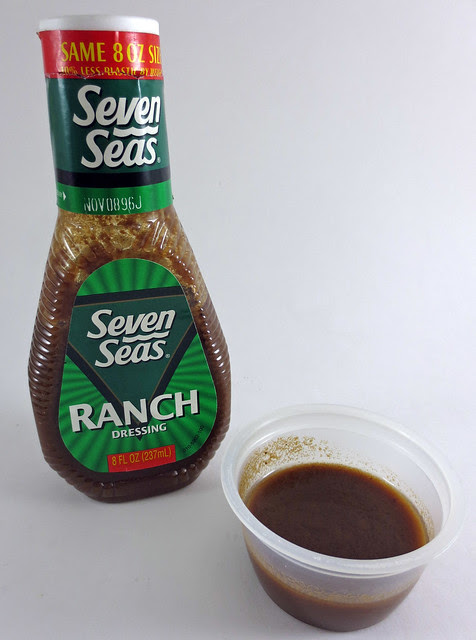 Nov. 8, 1996 was 3 days after the 1996 US presidential election, when Bill Clinton defeated Bob Dole and Ross Perot to win his second term. It was also a Friday.

This bottle of salad dressing is significantly older than a previous find, my pre-9/11 Raisin Bran, which only went back to August of 2000.

Okay, I admit: I'm actually lying about all this.

There were two bottles. (The other had a sell by date of December 1996.)

Slugs Having Sex and My Dislocated Shoulder

I thought the most disturbing/disgusting thing I was going to see on Thursday night was these two slugs mating on my wall: 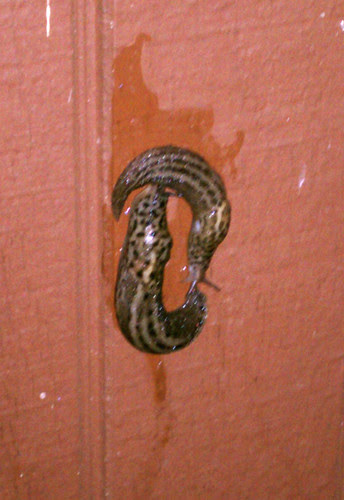 Instead, it was looking down at my left shoulder after I dislocated it sliding into third base during a kickball game.

The details are mundane. We were at our usual fields; I was lead-off hitter and got onto first because the fielder dropped a slippery line drive, and advanced to second on the overthrow.

Two plays later, I was running towards third. The ball was already heading to the third baseman, but I had a chance, so I slid.

I was on my left side. Partly because I was headed directly at the girl playing third and I was trying to slow down, but mostly to support myself, I put my left arm down.

I've never dislocated anything (that I can remember -- I have to ask my mom... when I eventually tell her), but it was obvious what happened. First off, it hurt, and second, it looked like I had an extra joint in my shoulder.

After a few fruitless tries to get pop my shoulder back in (I knew where it was supposed to be, but had no idea how to get it there), my teammate Mike drove me to the ER at Inova Fair Oaks Hospital (after a few tries to get to an urgent care - I was pretty useless as a navigator).


The Treatment (and the Photo)

It was pretty empty, so they got to me immediately after I signed in.

After getting my history taken, and having to admit to several people that this was a kickball-related injury, the doc saw me. He was going to put in a line for anesthesia, but I pooh-poohed such decadent indulgence, so they just numbed it a little with some lidocaine.

Here I am waiting for it to kick in. That extra bump... that shouldn't be there: 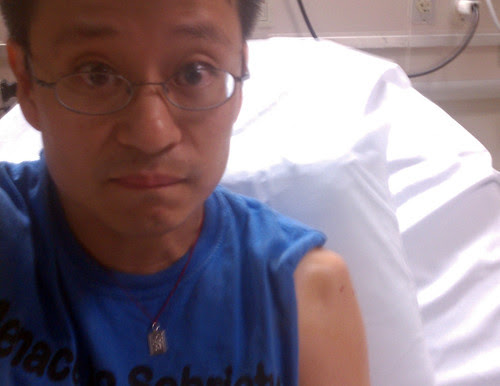 The fixing of the shoulder was a much more gentle and gradual process than what you see in the movies, and it didn't hurt at all through the lidocaine. They just sort of rotated it slowly until it *popped* back in.

The rest of it was just x-rays and post-discharge instructions. Here's a video I took while they were wheeling me to x-ray, featuring nothing of consequence save light, relieved banter:


I was hoping for a steadier, dolly tracking-style shot, but I guess I didn't do a very good job bracing my phone. (Nerves and all. Incidentally, the YouTube shaky image correction made my feet ripple and sway in a disconcerting way, so I ditched it.)

As I was waiting for the X-ray results, my teammates, who'd won the game without me (barely), and who were in the waiting room, came in to visit. DeAnna took this photo: 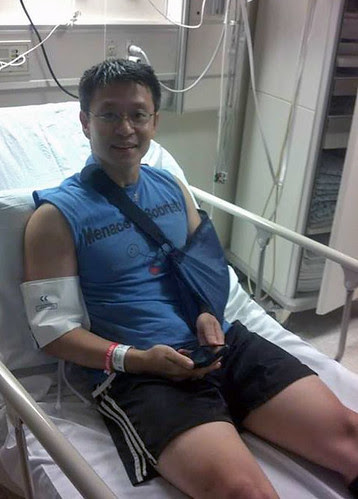 That's about it. I have a prescription for Vicodin, but I'm sticking mostly to Advil and frozen vegetables (topically applied). I'm advised to wear the sling for a few days, and have a followup with an orthopedist.

Oh, and my season is probably over.

I'll probably have a few followup thoughts about healthcare at some point, but right now, I'm just happy that I can move my arm.
Posted by Joelogon at 10/04/2013 2 comments: