Apparently, this here blog's pages cut off prematurely when viewed in the Windows MSIE browser.

This, I did not know because I am primarily using Firefox.

Viewing source shows all the entries are here, it's just cutting off just below the Google ads.

Animated gifs should NOT be used to fake embedded video in Web pages.

If you absolutely must do this, if it's so absolutely vital to your cause that you MUST have fake video gifs of penguins getting pushed into puddles or whatever, at least keep it small.

All this time, I thought I was recording F/X's "Over There" (Stephen Bocho's Iraq series) on my VCR.

It had actually caused me some concern, since 1. I had an ever-growing backlog of unwatched episodes, combined with 3 weeks worth of unwatched "Battlestar Galactica", and 2. I had thought that the tape rolled over, and recorded over the Forrest Griffith/Stephan Bonner UFC fight and the PBS showing of "Whale Rider."

Last night, I rewound the tape and settled in for some hard-core, brain-melting television watching.

Hrm, the 15+minute fight was still there. Fast forward a bit. So was the movie.

Now, either something spontaneously happened where you can compress 8+ hours of footage on a 6-hour SLP VHS tape, or I did something wrong.

I checked the timer settings.

Over There was also fine. Weekly, Wednesday night. See, starting 8/31?

After handling mini-marshmallows (e.g. attempting to throw them into a cow-orker's mouth. Note: Cow-orker should be a willing participant in this activity.): Do not wipe hands on shirt (especially when wearing a dark shirt).
Posted by Joelogon at 8/29/2005 No comments: Links to this post

The Perils of Overrelying on Unsend

I just sent an e-mail where I referred to something or someone in mildy less-than-flattering terms.

Unfortunately, I had hit "reply" instead of "forward."

Exhibiting my lightning-fast reflexes, I picked up the phone, and ever so humbly asked the unintended recipient to delete the mail without reading it.

I don't know whether she truly hadn't read it yet, or is simply adhering to a polite fiction.
Posted by Joelogon at 8/26/2005 No comments: Links to this post

Despite repeated encounters, I keep forgetting that institutional food provider Sodexho-Marriot's ("Now With More Ho") interpretation of "spicy" is "less bland than our other stuff."

For example, today's curried rice looks and smells mildy curry-flavored, yet somehow manages to have less taste than regular white rice.
Posted by Joelogon at 8/26/2005 No comments: Links to this post

Troy Has a Posse

Okay, so ever since I saw Troy's mug shot...er, team profile photo, something has been bothering me.

It reminded me of something familiar.

I figured it out this week; there's a meme that's been going around for years, in the form of sticker grafitti that says Andre the Giant Has a Posse (Google Image Search link): 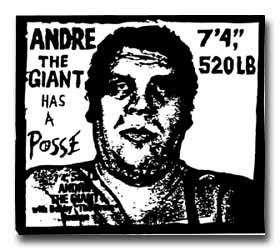 You can find the stickers stuck up in unlikely places all over the world.

Once Photoshop came out, the meme has mutated as people do up their own homages. 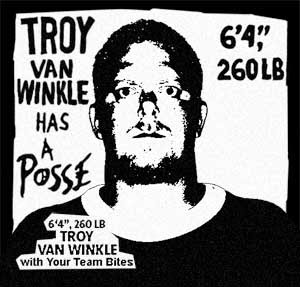 I had to take a wild guess on the stats.

So endeth the lesson.

When meeting handouts are being distributed, the accepted protocol is: Take one, pass rest on.

Not the other way around.
Posted by Joelogon at 8/24/2005 No comments: Links to this post

You Made Me Do This

Lon got bit by a dog last week.

It didn't break the skin.

Normally, this wouldn't have warranted a blog entry, but when it came up in conversation, I asked him why he didn't tell me about it last week. He said,

"Everything I tell you ends up in your blog."

This is obviously untrue.
Posted by Joelogon at 8/24/2005 No comments: Links to this post 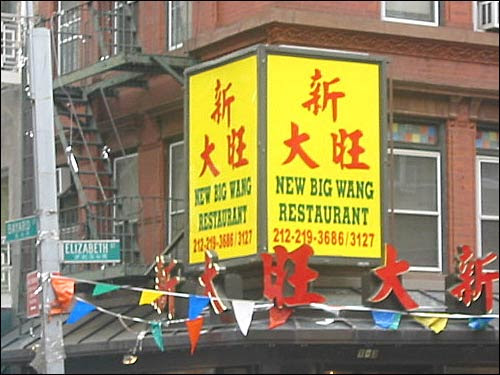 This has also been noted by others (who did not have thumbprints on the lens).
Posted by Joelogon at 8/24/2005 No comments: Links to this post

Generally speaking, when screaming out someone's name, it is best to make sure you know their name first.

Even if you are only off by one letter.

Alas, this was merely during a sporting event.
Posted by Joelogon at 8/24/2005 No comments: Links to this post

Yesterday, a cow-orker (who shall remain nameless) pinged me in an IM, asking me a follow-up question from an earlier meeting. Something about re-assigning existing promo codes from a blah blah blah...

I had no idea what he was talking about, as I haven't been in any meetings with him that I could remember. This caused a few moments of brain-wracking.

Fortunately for me, it turns out that he had someone else in mind.

Perhaps he's just obsessed with me.
Posted by Joelogon at 8/23/2005 No comments: Links to this post

I had a whole bunch of stuff planned for Saturday. I even got around to doing some of it.

It was also chock full of dumb stuff (which will be numbered)0.

I spent the waking up portion of the morning trying to play Halo on Legendary (the hardest level)1. . I was inspired after watching a few episodes of the video-game animated talk show, This Spartan Life.

I then headed into Arlington to do a few errands. It was a hot day, so I decided to get a refreshing Slurpee, good for a free song at the iTunes Music Store.

No more big Slurpee cups with the free song.2.

Worse, I ended up getting a Coke-flavored Slurpee, which was one of the more disgusting things I've ever tasted.3.

Now, based on the evidence that I saw on the road, I would think that Ford Focus drivers are the dumbest people on Earth. However, I know this is not the case.

In the first incident, I was headed east, just by Westmoreland street. It's two lanes with an exit-only lane. I saw the Focus in the exit lane, going pretty darn fast with no sigsn of slowing. Not only does he cut in at the last minute, crossing the solid line and two lanes of traffic, fitting through a space that required some bending of the laws governing space-time interaction.4.

In the second incident, the Focus in question was sitting on the Lee Highway/Spout Run exit. Or more precisely, in the rough part between the exit and highway, trying to get back onto 66. Bad idea.5. I didn't stick around to watch.

Anyway, I made it in to Arlington. One of the points of the exercise was to go to the CD Cellar. I managed to get out without causing major damage, even though I appear to be buying all the music I should have bought in the mid-90s (but didn't)6.. I did, however, make my first Madonna CD purchase, finally getting Ray of Light.
Posted by Joelogon at 8/23/2005 No comments: Links to this post

When driving your tour support van on the southern portion of the New Jersey Turnpike (as seen late night on Friday, August 12), please note that the left lane is for passing only.

Joelogon
Posted by Joelogon at 8/16/2005 No comments: Links to this post

Dumb Thing I Forgot I Did During Live 8

I had to work during Live 8, but at least I had a nice fat pipe with which to watch the streams.

Anyway, I was listening on a conference call part of the time, and I had my headset on, muted.

I was watching Madonna on the London stream, and when she did Ray of Light, I took off the headset so I could get a better listen.

You know, to rock out.

I switched to speakerphone so I could still hear the call.

I remembered after I heard one of the more senior execs on the call asking whoever it was to mute their phone.

I dropped off the call. Quickly.

In a somewhat-related postscript, we had an company all-hands Webcast last week. They used the Madonna Live 8 London footage as the warmup.

Unedited, so it included Madonna shouting "Are you fucking ready, London?"

I found that kind of amusing.
Posted by Joelogon at 8/10/2005 No comments: Links to this post

* I'm all out of bubblegum.

* Bazooka Joe comics are as dumb as ever.

* A 5-cent piece of Bazooka Joe bubblegum is the same size as the old 3-cent piece.

* If I buy Everlasting Gobstoppers, I will eat them. Quickly.

* I bought a DVD (Harold & Kumar Go to White Castle: Extreme Unrated Edition) two Saturdays ago. I opened it last Saturday. The case was empty.

* Due to a team outing to Annapolis, I missed the last terrestrial broadcast of the Ron & Fez show.

When topping off one's gas tank in order to get a discounted car wash, one should remember there is a difference between an 8-gallon purchase and an 8-dollar purchase.
Posted by Joelogon at 8/04/2005 No comments: Links to this post

Sometimes I Scare Myself

Entering my darkened house last night, I heard voices coming from the kitchen.

I froze for a moment, then prepared to commence the ass-kicking.

Then I realized I was about to vent my fury on the on-air staff of the CBC radio show "As It Happens," which was coming from the clock radio I had left on that morning.
Posted by Joelogon at 8/04/2005 No comments: Links to this post