(We also knew at some level that not all music from the '80s was memorable, but listening to the bottom of the list revealed utterly forgettable turkeys.)

On the one hand, I can empathize with the youngsters of today, having to hear their elders droning on about, say, Culture Club, or early U2, just as we had to put up with folks waxing rhapsodic about Perry Como or Elvis.

At the same time, after you've seen things before, you can't help but see the influences of previous generations, where to the folks who haven't, the influences are so integrated into the landscape that they're transparent.

John Scalzi recently mentioned this in the context of movie remakes; this week's Studio 360 took on '70s disco.

Since storytelling has always drawn from the same archetypal themes that go all the way back to the beginning of shared stories, I find the thematic repetition in music particularly irritating, (and haircuts -- particularly the recurring shag/bowl/Bieber haircut that I'll always place in the 70s, even though it tries to resurface every 20 years or so).

Obvious as it may be, everyone wants to make their own mistakes and put their own stamp on things, so Lady Ga-Ga will continue to be Madonna, and pop/dance music will continue to recycle disco and electroclash (with more AutoTune, which we used to call vocoder)

Last summer, I started playing Mafia Wars on Facebook. It was mostly in the nature of research -- finding out what the fuss was about, looking into Facebook social gaming, etc.

I wrote about it a few times on the NetSol blog, talking about how Mafia Wars gets people to do stuff, as well as how the Mafia Wars gameplay encourages interaction with members of your social network.

There's a lot you can talk about -- casual gaming, the brain chemistry of addiction and gambling, play-acting at transgressive behavior (or actual transgressive behavior, when it came to some developers and affiliate marketers), and most importantly, maintaining contacts via social grooming.

But it also got to be a chore. An essay by A.J. Patrick Liszkiewicz in March, Cultivated Play: Farmville, was still fresh in my mind -- it's all about how one of the rewards of advancing in Farmville is that you don't have to play it as much, as well as touching on obligation and network effects.

So there I was, back in April or May, at whatever level I was at, having just unlocked the Thailand achievement where you achieve top status simultaneously with the Triad and the Yakuza, and then... what? Every additional locale added was just another link to click, revealing another set of arbitrary tasks and achievements.

It ceased having any pretense of fun. So I bailed. Instead of just going idle (which would leave my fairly middlin' to high-level character as a teammate of my friends' Mafias), I went into my own version of "Mafia Wars Witness Protection": I deleted the app, blocked all updates, and didn't look back. 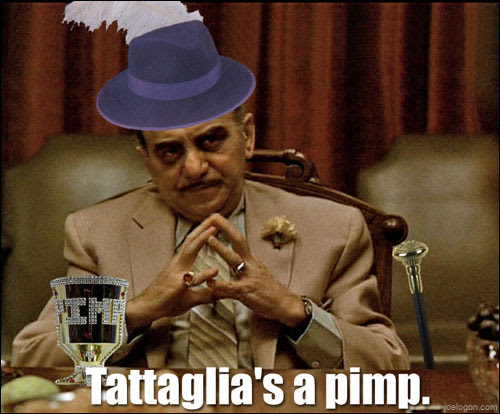 RIP Joelogon Tattaglia
Ultimately, I lasted about a year. I'm not sure what factors, if any, might have kept me in the game -- I'll have to think about that (as will Zynga, no doubt.)
Posted by Joelogon at 7/14/2010 No comments: Links to this post