The Inspiration
I came up with my Halloween costume idea early in October. I don't know if most people have a favorite traffic sign, but for me, it's Speed Hump.

The Preparation
I figured that building the sign itself would be pretty straightforward. But I had some trouble figuring out how to mount it. I wanted to wear it on my head, but decided that if I couldn't come up with a way to mount it and make it see-through, I would just wear it on my chest. So I started the build.

The Build
The sign itself is a piece of 20"x30" 3/16" foam core board, cut down to 20"x20" and with the corners rounded off. I wasn't sure if paint would melt the foam core, so originally I planned on getting the color by gluing on colored paper or vinyl sheets. But after some research, I figured the foam core could handle the paint (which was good, since otherwise it would have been hard to match the color of the eye screen).

For the lettering, I used alphabet stickers from Michael's, which were a good-enough generic sans seriff font.  In a pleasant coincidence, the letters also happened to be the same width as the black electrical tape I used for the border (3/4").

I left about two inches of separation between the rows of letters (more than in real life) for the eye hole, which I cut out with a utility knife (even though I was still being optimistic, since I still hadn't figured out the head mount).

After some research, I decided to use buckram fabric, a stiff cotton mesh, for the eye screen.


I spray-painted it yellow.


Then, I did a practice run on a scrap piece of foam core. I cut out the eye hole, then cut a plus-sign-shaped piece of buckram to match. After I ironed creases into it, I hot-glued it to the inside and back of the eye hole.


As you can see on the front side, being neat with the hot glue gun counts for a lot (I'm glad this was only practice):


The Mount
After I did the real eye hole, it was time to figure out the mount. After fiddling with a bunch of headlamp mounts, bike helmets, and even my CERT helmet, I figured it out (though I didn't take any pictures in-progress).

All you need is a bike helmet that's still in its box (if you don't have a box, or it's not completely square, you can make one out of cardboard. But that's extra work):
After a test fit, I wrapped outside of the box in duct tape. Then, I spray painted the duct tape black. (Why not just spray paint the box? Because shut up, that's why.) I also used black magic marker to color in any other exposed spots of duct tape.

For the actual mount, I used Velcro adhesive tape, sticking a few patches of loop-side onto the box, and some hook-side to the sign. (Actually, I hot-glued some thin cardboard onto the back of the foam core, and stuck the hook-side Velcro onto that. I didn't want the paper to peel away if I needed to make adjustments, which is why I chose Velcro in the first place.)

When it's all done, it looks like you're wearing a box with a chin strap.

Then it was time for the finishing details. Looking up specs for mounting traffic signs, I punched two holes 2" from the top and bottom of the sign, threading 5/16" bolts, washers, and nuts through them and hand-tightening them.


For the "post", I took two strips of silver duct tape (about four feet long), and taped them back-to-back (sticky side to sticky side). Then I used the same hole punch to punch a row of 3/8" holes down the center, an inch apart. (Actually, the spec is an inch apart on center, so my post isn't to spec. Darn.)

I also taped a few pennies to the bottom for some weight, ironed it flat, and used more duct tape to stick it to the bottom of the sign.


The Tweaking
The rest of it was just black pants, shirt, shoes, socks, and gloves, as well as a black balaclava on my head, so you couldn't see me from the side.

For my first outing, I discovered that the balaclava didn't work out so well -- not only were my glasses fogging up, but the way eye screen works, the "inside" has to be darker than the outside.  Because the back of the sign was open, there was no real "inside." So it was really hard to see out.

As for drinking while wearing it, I borrowed a crazy straw, which kind of worked. But after a while, between the inability to see, hear, or drink, I took off the helmet and wore it backwards (so the sign was behind me).

Without the sign, it's almost halfway to a Dark Helmet costume:


For the second outing, I ditched the balaclava, and taped some black weed barrier fabric around the box, forming a kind of veil. That worked slightly better. You can see it above, and here in the side view: 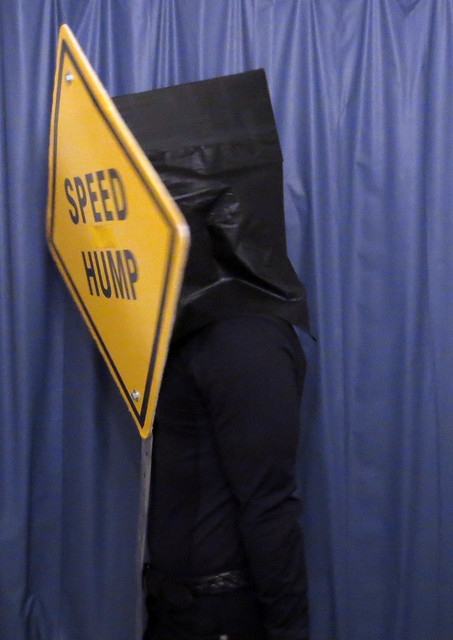 However, another problem became apparent when I went into a dark, crowded bar: Not only is it hard to see, but you're either bumping into people with the side of the sign, or they're bumping into you.

Anyway, that's the costume. I'll probably detach the sign and use the box for a future head mount. 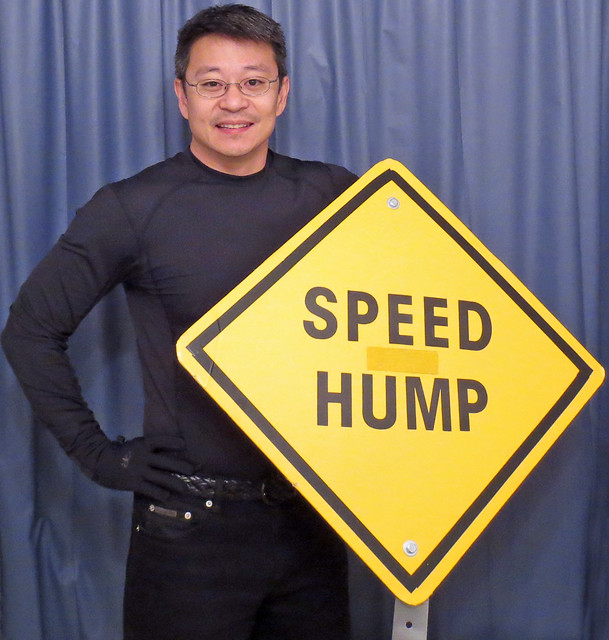 Verdict
I'm happy with the final product; it looks just like I pictured it. However, it's kind of annoying to wear, especially in crowded places.


Pluses: Relatively easy to make, looks good, got a lot of compliments.

Minuses: Hard to see, hard to talk, hard to drink, hard to move around, people bump into it. 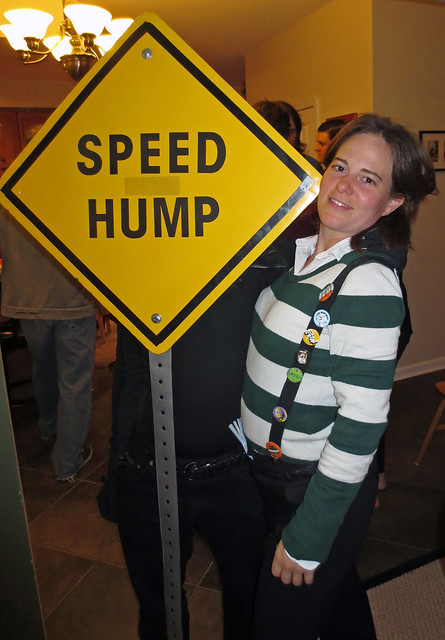 Materials
(Most of the crafty items were bought at Michael's craft store, using a 40% off regular-priced items coupon)

Incidentally, you can buy a real 24"x24" Speed Hump traffic sign online for about $50.