This Driver Is About to Have a Bad Time

This is a Google Maps street view of I-66 heading west, just past the Teddy Roosevelt Bridge and immediately after the "Lane Ends Merge Left" sign.

You see that dark Honda in the left lane about to drive over that dark line?

That driver is about to have a boneshakingly bad time.

A closer look shows why:

See that ridge in the road patch that looks like a very badly designed speed bump in the middle of the highway? That's exactly what it is.

It's been around for at least a few months. I first discovered it at night, coming back from a concert in DC. Since I don't drive into DC as much as I used to, I'd forget about it for a while, and then the next time BAM.

If I can figure out who to complain to, I'm hoping they can fix it; if not, we'll need to come up with a nickname for it, like Toronto's former "Humber Hump."

Requiem for a Mirror Snake

One of the characteristics of hoarders is the tendency to attach deep historical and emotional meaning to any object, no matter how mundane. It's why they can't throw anything out.

I'm not that bad (I think), but I'm a sentimentalist and keep a lot of useless stuff around because of history. 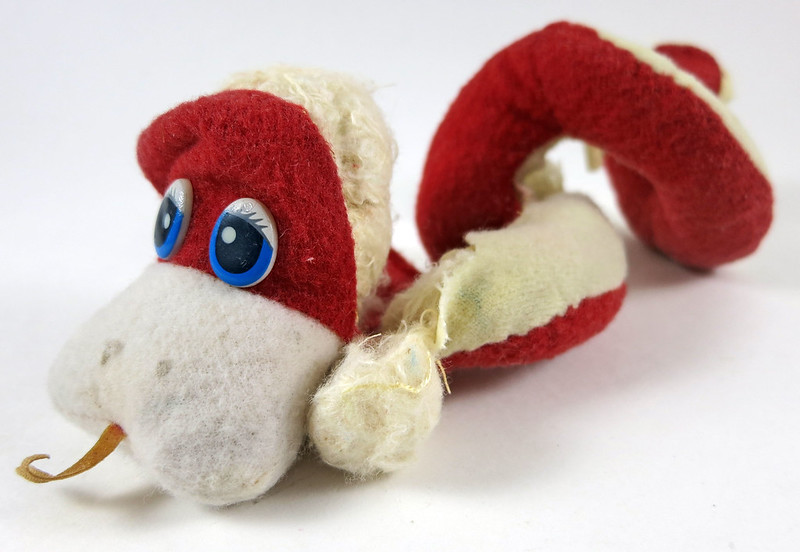 Case in point: My mirror snake.

It's a cheap stuffed animal I won from a crane machine during a high school Key Club leadership convention in the Poconos in 1988 or '89. Ever since then, it's been wrapped around the rear-view mirror arm of every car I've owned.

After 20+ years of temperature extremes and direct sunlight, it fell apart, splitting in four places.

I'm not that much of a sentimentalist that I didn't throw it out.

But not before taking a picture, and memorializing it in a blog post.