Thoughts From the Apples in Stereo Show at the Black Cat

Also last week, I went to see The Apples in Stereo at the Black Cat.

I'd planned on making it a twofer, going to a Social Media Club discussion thing, but by the time I rolled in to DC, it was already 8pm, so it was too late to hear what DC's social-media-minded PR-types thought of the state of things. To be honest, I can't say that I was terribly distressed about this, but fortunately, cow-orker Frank was able to represent.

When I got to the Black Cat, there were two lines out front. I went to the closest one and asked what it was for. The guy said, "Beck."

Since this made no sense to me (being the only person in the DC metro area who didn't know about the Beck secret show on the back stage) I figured he said "back", as in "Back Bar", which would have made sense if this was the 9:30 Club. It took me a long while to figure out it was actually for a Beck show.

I eventually found the right line and got in. I suppose I could have tried to get in to see Beck, but I didn't.

The rest of this will be thoughtlets based on napkin notes (actually, written on the back of the map), plus a few photos (my full photoset is here):

Things You Don't Expect to Hear Sitting at the Bar, Upstairs at the Black Cat:
Two guys drinking Red Stripe bottles, talking about ACOG scopes and iron sights (gun talk, for those not in the know). 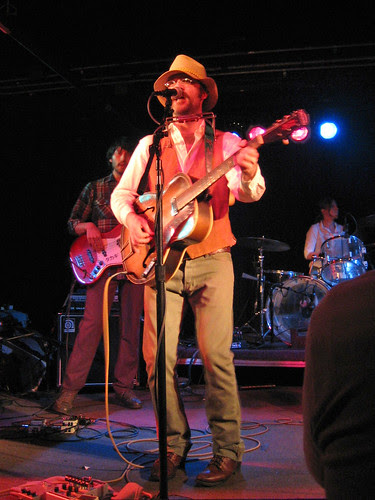 There was also a cellist: 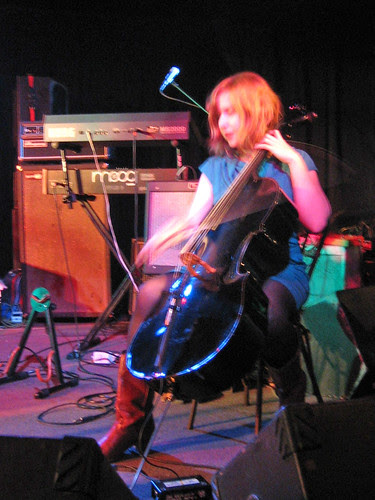 Random Existential Crisis Moment:
I was looking out at the crowd of young kids, girls with their denim miniskirts over striped leggings and boys with their funny hats and strange facial hair, and I was thinking, "You've still got most of your life ahead of you, whereas in my case, 'most' is a mathematical nuance, because if I'm lucky and medical technology advances significantly, I'm already 1/3rd of the way through this ride." 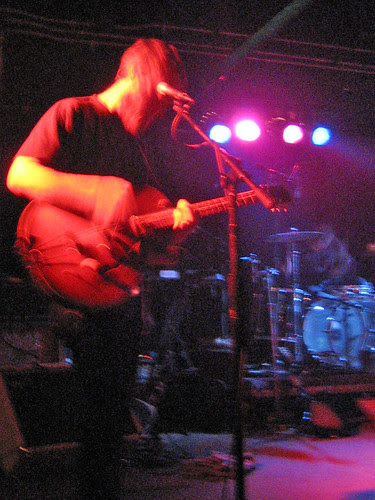 I don't know if it's accurate, but at points I was hearing a mashup of David Byrne and the Machines of Loving Grace, with a British accent.

If It's Too Loud, I'm Too Old
Even with 20dB worth of volume-reducing earplugs, it was still too loud for me (although I was right in front of the stage, taking pictures).

The Main Act (Not What I Expected):
I have to admit, seeing the Apples in Stereo in person was not what I expected. For starters, I could have sworn they had a female vocalist in there somewhere (they did -- she left the band this year).

More importantly, I had pictured some freshly scrubbed pop band, whereas the front 3 appeared to have a combined age of 120 or so, and I kept seeing Eric Bogosian on guitar, Clint Howard on lead guitar and vocals, and the captain from Jaws on bass: 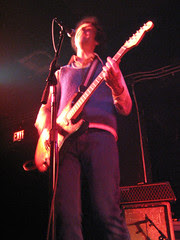 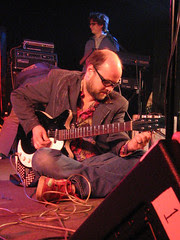 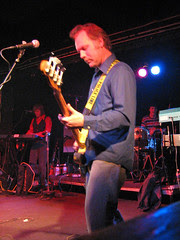 After doing a little reading, I guess the indy-pop scene is pretty small and centered around the Powerpuff Girls Soundtrack Album (which is how I first heard The Apples in Stero), since Bill Doss, playing keyboards, and John Hill (the Bogosian-looking dude) both contributed tracks on the PPG soundtrack album (Doss, Friends Win and Hill [with Dressy Bessy], Bubbles)

If It's Too Loud, I'm Too Old, Part II:
It was still too loud in the back bathroom with the door closed.

On Feeling Out of Place (for Different Reasons):
As I left, I was leaving with the youngsters who were rushing to catch the last Metro before midnight.

So, overall the show was pretty good. They did play a bunch of songs off their upcoming album, though their sound is tight. I also like how the photos turned out -- up close, I let the gelled stage lights do the work (the few flash shots I took came out horribly): 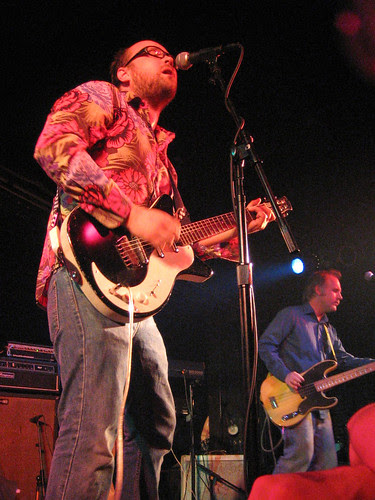 "After doing a little reading, I guess the indy-pop scene is pretty small and centered around the Powerpuff Girls Soundtrack Album (which is how I first heard The Apples in Stero), since Bill Doss, playing keyboards, and John Hill (the Bogosian-looking dude) both contributed tracks on the PPG soundtrack album (Doss, Friends Win and Hill [with Dressy Bessy], Bubbles)"

Actually this particular indy-pop scene is centered around a collective/label - Elephant 6 - and Denver, where both Apples in Stereo and Dressy Bessy come (came in the case of Apples) from.

Wozzo -- Saw that in the wikipedia entry. So one could say they're the most prolific group to come out of Colorado since Focus on the Family. -- Joe

If only they were the most prolific. Jam-grass bands ala String Cheese Incident and Leftover Salmon are Colorado's biggest musical export.