Summary of the Week's Entertainment (Which Is to Say, a Drinking Report)

Tuesday: Ri Ra in Arlington. It was apparently trivia night, with singing. Also, there was money being stuffed into shirts, but the parties involved have no memory of this (and there were no pictures -- more's the pity): 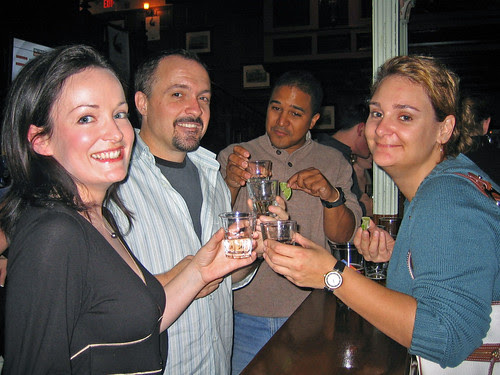 Shots. How out of character.

I got there a bit late, so the crowd had thinned out. Even so, I didn't do so good with the networking -- the only business card I parted with went into the fishbowl at the sign-in, and I pretty much only talked to people I knew from work (which is not to say that they were all still with the company).

One notable exception was a guy from 'Congressional Quarterly' -- I'm concerned that he actually believes that I thought CQ was a men's fashion publication.

In his post-event writeup, Rafat Ali notes that the BET Hip-Hop Awards afterparty was scheduled to start right after the mixer, which explains:

* Why the crowd's demographics shifted from lily-white to jet black abruptly at 9pm.

* Why I saw incoming guests being wanded with a metal detector as I was leaving.

I stopped in to Galaxy Hut on the way back; sat at the bar and was chatting up the woman sitting next to me. I thought we were getting along famously. We did hit a lull in the conversation, though that ended when we were joined by her boyfriend of 5 years, whom she had neglected to mention until that point.

I admit, I'm not always the most observant person in the world when it comes to these kinds of things, but I'm pretty sure I would have picked up on that little tidbit.

Now, I will have to object if anyone tries to characterize it as a rescue -- I'm not one for the hard sell (if anything, I have a well-documented incompetence for that sort of thing), but who knows.

Also, "my" painting by artist Ben Claassen III is no longer there. I'm assuming it was sold.

Thursday: Clyde's of Reston (where I picked up that lovely violation sticker) for a meeting with the lads. Made an early night of it, so nothing much to tell there, except I had a much-needed buffalo burger, which hit the spot.

Friday: Clare and Don's Beach Shack in Arlington, for one last go before they move to Falls Church.

We didn't end up staying all that long; the karaoke was not up to the high standards we've come to expect.

We ended up at Ri Ra again: 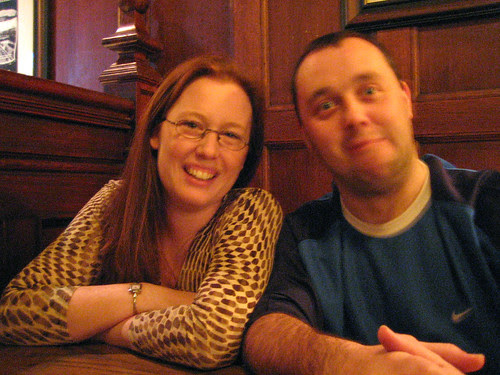 Are you familiar with the bar prank where you tell someone to place their index fingers on the bar, and set a full drink down on them?

Mrs. Elvis was not: 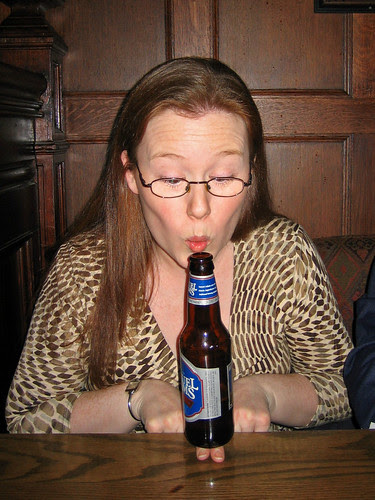 It was loud and crowded, though in a way different from your Grill, Mr. Days or Ballroom.

See the other two photos in the Flickr set for more shenanigans, both real and notional.

I had not been to Tallula before, and had been a little wary for it's whole "wine bar" thing (even though I know it's not a wine bar). I'd never been there when it was Whitey's, either.

Unexpectedly, I also ran into Pat and Mike (unexpectedly, because they are rough and uncultured types, with thick necks, rough hands and dull wits), so I hung with them and their friends, as well.

There was a fine beer selection and plenty of space in the back, as well as a good number of unencumbered females in the main bar (nothing untoward happened that evening, unfortunately), so I shall have to add it in to the regular rotation.

Summary: Since driving home and going to work the next day are typically involved, moderation is the name of the game for weeknights out. Still, even by those standards, 5 nights out in a week is not something I regularly do. But it's more about the company than the beverages.

I did a search to see if anyone else had a review of Tallula and found your blog. I can't wait to come back to Arlington so I can go back there. I'll have to check out your blog before I go to find other interesting places to visit.

Well, I'm not a foodie (as you appear to be), so my reviews tend to be on the liquid side, but thanks. -- Joe