September 11, 1998: This anniversary tends to be forgotten due to, you know, September 11, but the Starr Report was publicly released. It was in no way your typical Friday news dump. The Post article about preparing for the online release of the report includes this bit:


Several commercial Web sites, including America Online, Compuserve and Washingtonpost.com, are planning to post the summary as soon as they receive it. Tricia Primrose of America Online said that members can use AOL's parental-control technology to keep youngsters from accessing the document.

We dedicated the entire lead promo spot (including a nifty, AOL.com-branded graphic) to the report, which we published in its entirety on My News, thanks to the swift efforts of the My News team. I remember Bill Frischling, fingers flying as he used MS Word to strip formatting from the provided file (which was originally Wordperfect) to get it ready for posting.

I forget the precise chronology, but the time stamp on the live page screenshot is 3:17pm. AOL.com was one of the first (if not the first) to get the full text online. 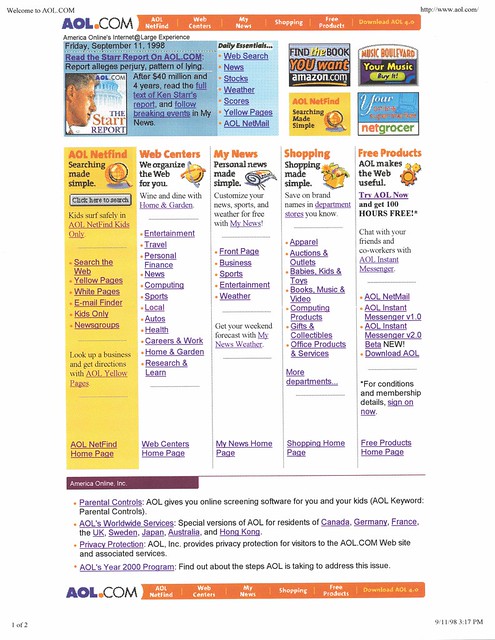 I used to have a printout of one of the wire service stories about the online release of the Starr report; it included a photo of a computer screen (possibly at a cybercafe) displaying the report -- it was, of course, the My News version.