June 26, 1999: For a Summer Fun lineup, we led with movie previews, using a promo pic centered on Cartman from South Park: Bigger, Longer & Uncut. The other two links were for Love@AOL and Chat Central (presumably AIM chats).

There isn't much else notable about the page, except that it's the first full-screen screenshot we've seen for some time. If you look at the bottom of the page (though this was off the dev server, so it might not have been exactly the same as the production version), you'll see the full lineup of corporate links, including AOL's spam policy, Y2K efforts, Parental Controls, and other links (including the mandated "Get Microsoft Internet Explorer" link): 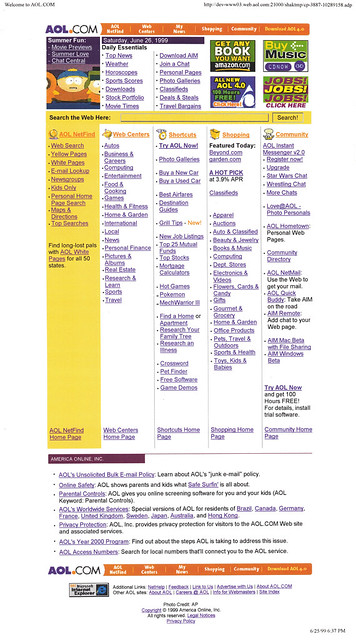