20 Years Ago on AOL.com: June 12, 1999 -- Love@AOL; Rare Saturday Update for the Death of DeForest Kelley Dies and NATO's Check-In to Kosovo

June 12, 1999: Saturday featured a promo for Love@AOL photo personals, though lets face it -- if you were trolling for personals on Saturday night, you might have better luck in one of the AOL or AIM chat rooms: 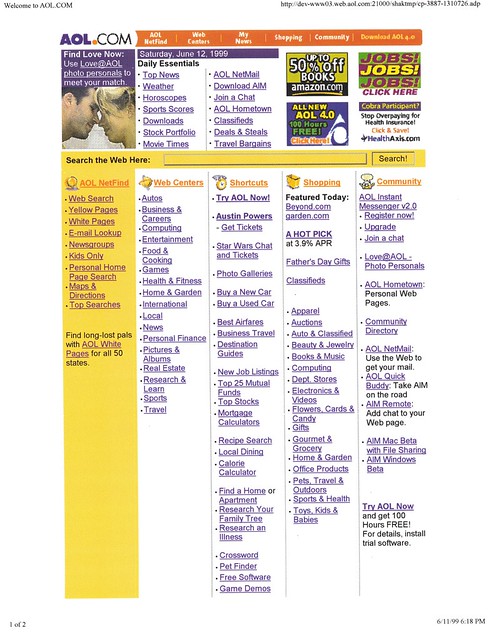 Apologies for the ugly screenshot, but we had a relatively rare Saturday update (we didn't have dedicated weekend coverage), to mark two major events, as seen in the main promo:
1. The death of DeForest Kelly, "Bones" from Star Trek
2. NATO peacekeeping troops entered Kosovo. KFOR, as it would come to be known, is still there (albeit in greatly reduced numbers):

[Series note: In the late 1990s, I programmed the content for the AOL.com home page, which relaunched with a new design on July 14, 1998. I printed screencaps and saved them. 20 years later, I'm scanning them in and posting them with a little commentary under the tag #20YearsAgoOnAOLcom.]
Posted by Joelogon at 6/12/2019