Tuesday night, I played in the Championship Final (Q4 2007 edition) of JOTTeopardy (not JOTTpardy, as I'd been calling it), the Jimmy's Old Town Tavern not-Jeopardy! trivia game where crowd participation is encouraged: 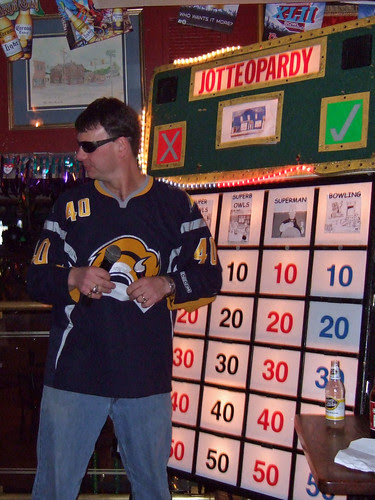 Jimmy Cirrito, your host.
Here are all of the night's photos: JOTTeopardy Championships, 1/29/08.

As it turns out, I was probably a little bit further down on the overall winners list that I'd previously thought (hey, showing up is, like, 90% of the battle, right?), and then only two of us finalists showed up. So they had to draft my opponent's wife. That meant I was facing a husband-wife team, who had 8 or so previous championship wins between them. It was not looking good for me: 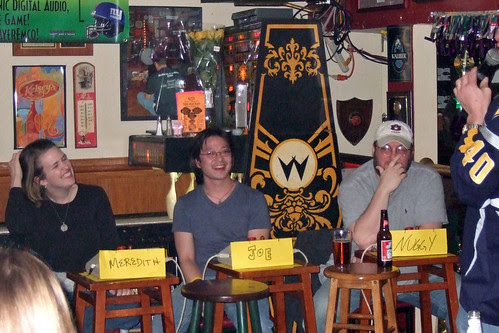 Anyway, the game was fun. I'm slightly concerned that people actually believed that I didn't know who was playing in Super Bowl (when asked during the intro who I was rooting for, I said "the Wizards"), and my performance in the Super Bowls category did nothing to dissuade them.

Other than screwing the pooch on the bowling category -- I forgot the number of strikes in a perfect game (12, not 13), and I kept mixing up Kingpin and The Big Lebowski (having seen neither); I did OK in the superheroes category (including stealing the max 50 point question, though there's probably still some controversy about the original members of the Justice League), and wasn't fast enough in the "Superb Owls" category.

The category was Actors, so I was feeling pretty confident. Overconfident, as it turned out -- the question was which '80s TV detective had been the original choice to play Indiana Jones, and I could only think of Stacy Keach (of the much-shorter-lived Mike Hammer), instead of the correct answer, Tom Selleck (Mr. Magnum himself).

As it turns out, I'd employed sound strategy (I'd wagered 205 points, leaving 5), but was in a no-win situation, as both my opponents had bet it all and gotten it right. So they got to split the first and second place prizes: 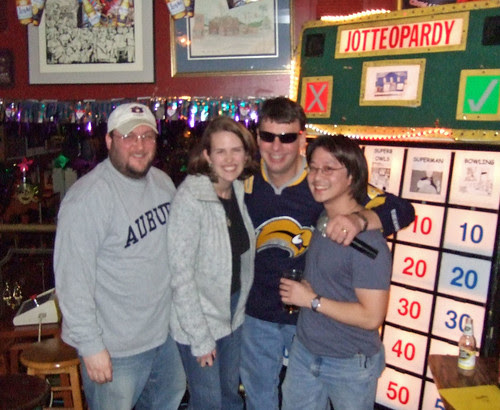 JOTTeopardy Finalists post-game with Jimmy.
Third place was good for $25 bucks and a certificate (slightly corrected), so it all worked out: 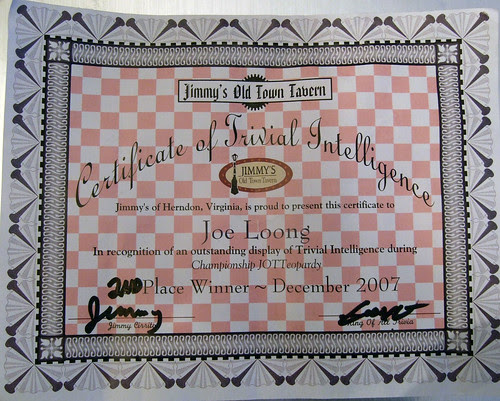 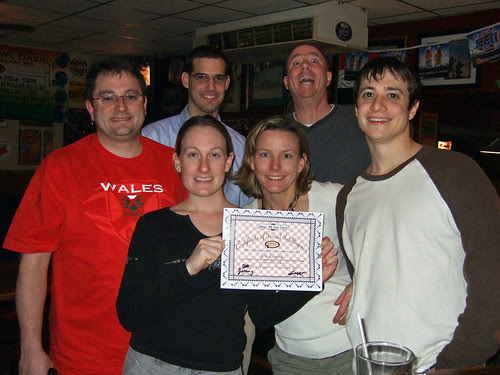 Some of my support team pose with certificate.
We hung out for a while longer -- there was the trading of caps and glasses: 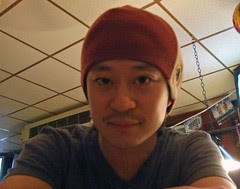 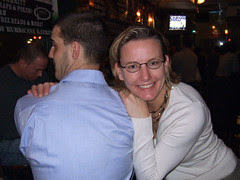 Me wearing Eric's Redskins cap (sideways, like he does); DeAnna leans on Eric wearing my glasses.
You can see the rest of the night's photos here.