I'd known this was coming for some time, and I'd managed not to think about it, but I finally have to acknowledge my shocking, inescapable fate:

John Scalzi killed me.
Adding insult to homicide, he had my carcass butchered, essentially turning me into a pile of steaks.

All this (including a hinted-at love triangle) happens between pages 131 and 139 of the third book in his Colonial Union trilogy (as good a name for it as any), The Last Colony: 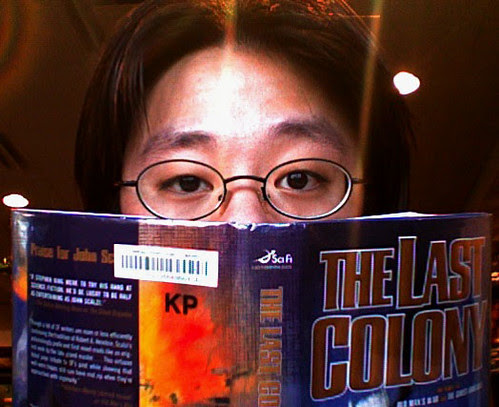 Me, engrossed in pages 131-139 of John Scalzi's The Last Colony
I finally got around to reading it (it came out spring of 2007) -- I'd started it over the weekend and just finished it now.

I'd known he was going to kill me (or at least a character who shared my name), and as a matter of fact, he had even asked me for permission before doing it. Which I of course granted gladly.

Why did he kill me? I guess you can say it's my own fault. I can even point to the exact date: July 11, 2006. In my capacity as AOL Journals Editor, I'd had the pleasure of working with Scalzi (one does not manage Scalzi -- one can only hope to contain him), a contract blogger for some Journals-related programming.

I'd made a joke about the opening sentence of his prior novel (second in the trilogy), The Ghost Brigades, and this was his way of responding. It's right there in the comments:

"That's it. I'm naming a character after you in the book I'm writing now. And then I'm going to have him eaten by nefarious aliens. Just you WAIT."

He also thanks me in the acknowledgments (page 319). Yay.

As to the book itself -- if I were the type of person to call something "a cracking good read," I would. Scalzi does have a tendency in his works to give his protagonists enormous influence in shaping events and outcomes, ultimately remolding the worlds (and even universes) in which they live. In the hands of a less-capable writer, it might drift into Mary Sue territory, but he makes it work.

Also, as other critics have noted, the subplot that kills me kind of vanishes after it occurs. To be fair, it's overtaken by larger plot elements, such as the looming extermination of the human race. Though, if I were less charitable and significantly more egocentric, I might think that John, spent after sating his bloodlust by killing me off, dropped it to move on to more interesting things.

(I can say this as an accomplished writer, myself. Though I tend towards essays and even shorter-form works [like captions and promo blurbs]. And I'm pretty weak in character development. And I have no experience trying to maintain a story arc or coherent plot. And I'm not so good at crafting realistic dialog. And I've never actually published anything. Nor tried to. But other than that I'm a fully qualified book critic.)

Anyway, if you want to see me get eviscerated and served up like a subprime cut of beef, go buy The Last Colony.

I told you, I told you! And you said you knew about it! And it's taken you this long to get around to your own demise?

All this because no one noticed the rock?

You're left with only one option. Rise from the dead and seek your revenge as an unstoppable zombie. Really, he's just askin' for it.

Karen: I'm procrastinating my way to immortality (the title of a future entry).

Rigel Kent: It would never work. I don't like brains.

"Deserve's got nothin' to do with it."

Except in this case, it kind of does...

Joe. You are just the type of person who calls something "a cracking good read." Talk about ever but slenderly knowing oneself. Sheesh!

Zort: I'm going to kill you. And leave sheesh outta this.