I Have Boring Teeth and Gums

At least, that's what my dentist and dental hygienist both said at my checkup today.

Other notes from in and around the dentist's chair:

* Things Are Looking Up: Some thoughtful pharmaceutical reps had apparently positioned an ad for antibiotics on the ceiling: 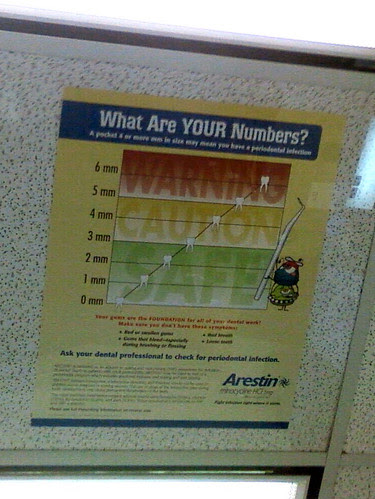 The ad is for minocycline, which is also used in treating anthrax, cholera, bubonic plague, gonhorrea, and syphillis. So it took them a while to get to periodontal infection.

The drug ad is addition to the normal, placid scenic vistas (mountain lakes and such), though I prefer watching in the laminated reflection as the hygienist works.

* Speaking of Vistas: The office features shiny new Dell laptops in each of the work spaces, replacing the desktop machines that they'd previously used to chart notes and enter charges and such in their dental practice management software.

Apparently, the system had hosed itself yesterday and they were just getting it back up -- they couldn't schedule new appointments and were also going to have to re-enter a lot of data.

Not knowing the intricacies of their system, I will just point out the obvious scapegoat.

* Your Groove, I Do Deeply Dig: Since they were a little stacked up, I had to wait longer than normal, so I got to hear more of WASH FM than I usually do. Groove Is in the Heart was playing when I was in the waiting room, and while I was in the chair, there was Sweet Caroline (oh oh oh).

* Swish and Spit, or Suction? Lastly, when it comes to rinsing, I still prefer the "swish and spit" setup, with the swirly bowl drain next to the chair, instead of the suction tube that everyone uses today. I guess I'm a traditionalist, but it was a cleaner rinse, and you didn't have a suction tube sticking to your tongue or threatening to suck your breath out.

I love to go to the dentist for my semi-annual-tooth-cleaning... as often as the insurance will pay for me and wholeheartedly agree with the bit about the 'swish and spit' being a cleaner rinse. I sorta miss the miniature porcelain sink next to the chair.

I was just at my dentist last week (and I wonder if we have the same one, as that picture looks like just what I was staring at last week). Dr. Clark in Reston? Don't ask me which one, because I can never remember if it is Jeff or Brian, or whatever.

I unfortunately had one cavity, my first since about the age of 12 or so. Quite a disappointment after twentysome years of cavity free checkups.

I'm ambivalent on the swish/spit vs suction debate. Neither method particularly leaves my mouth feeling clean. There always seems to be some residue still in there.

Charlotte Harris: I suppose the old basins used more water and complicated the plumbing, but I liked them.

Ryan: I'm not going to name names (especially for anyone who can potentially cause me great pain), so I'll just say -- why the heck do you go to Reston for dental work?

Because that is where I lived when I moved to the area, and I don't like changing dentists once I've found one that doesn't torture me.