Here we see yet another, particularly unfortunate failing of dead tree media (Weekend Supplement Edition) -- the cover to this Sunday's (January 6th) Parade magazine, which features an interview with Benazir Bhutto. It speaks of her in the not-dead tense: 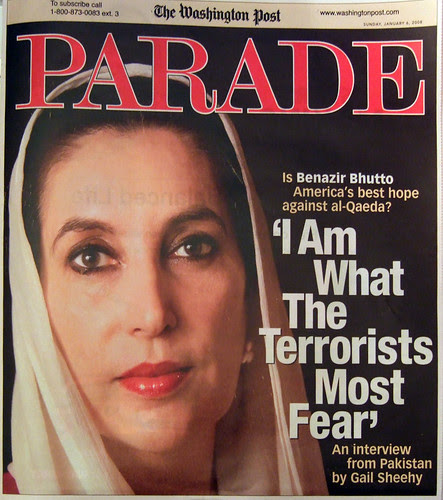 January 6, 2007 Parade magazine cover.
In the online edition, they preface the interview with this:

They also talk about how they posted the full interview online, immediately after her death.

Not having to deal with the production and distribution of a weekly national newspaper supplement, I'm sure there are very good reasons why they couldn't update the edition. Even though she was assassinated a week and a half ago.

And I'm pretty sure that the dead tree edition of the magazine reaches far, far more people than the online version (looking at the demographics of the people who still read the Sunday newspaper).

The techno-optimist in me hopes that this is going to be one of the last times that print media gets so badly overtaken by events. Not because print dies -- that would be bad, since the form factor is more convenient and conducive to serendipitous browsing.

I'm just looking forward to the potential transformation of print media if and when electronic paper ever gets here in a large-format, consumer-friendly, Minority Report-esque way. Which will turn dead tree media into a print/broadcast hybrid.

This was actually almost publication-specific. There are very few weekly pubs that have such a long lead time; Parade's is such because it has to be distributed across the country to the 100s of newspapers in which it appears. I thought it was interesting, though, that they couldn't even manage to send out a flyer to accompany the magazine or anything like that. They probably decided it was too expensive, but it just made them look really sloooooow.

Indeed. I guess I can appreciate the logistics behind it, but it ultimately still seems such a... horse and buggy way to do it.