Fark You, You Farking Farks. (Fark)

Maybe I can scoop the danah boyds of the world and do a monograph on the culture, community, and conventions of the popular (and pageview-driving) Fark.com and its premium counterpart, TotalFark.com.

For now, though, here's a slightly amusing (unless you're familiar with the community, in which case it's slightly less non-amusing) screenshot of the TotalFark main page, which displays all links submitted by Fark users (only a very small fraction of those links are selected for display on the Fark main page): 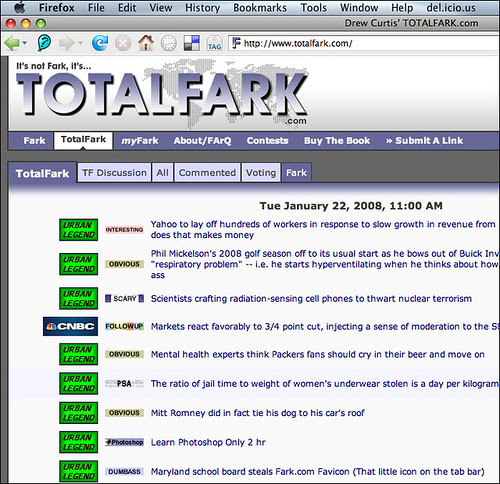 Glitch in the TotalFark matrix.
This was taken about 11:40am ET -- there was apparently a glitch where the "Urban Legend" source icon was showing for just about every submitted link, whereas the icon should be specific to the Web site it's linking to, as with the CNBC icon. (If a site doesn't have an approved icon, a user-populated text link shows instead.)

According to my Fark profile, I'm up to 14 greenlit links (which is nothing -- the supersubmitters in the Top Submitters list have thousands of approved links, so I would guess I'm in the transitional area of the subby long tail).

Of the two that were approved, neither made it to the main page, going instead to the lower-trafficked Geek and Sports category pages. So if you're a Farker who wants to inflate your approved links count (this is important to some people), submit links to the category pages and you'll have a better chance.

Anyway, I do want to talk more about the Fark and TotalFark communities in the future -- it's very interesting how the communities have adapted and developed conventions around some of the inherent limitations of the platform.