I started the day feeling pretty bad for yelling at my mom in a dream. That, and the hangover.

I felt better after making breakfast: turkey and cheese omelet, hash browns, english muffin, and coffee. No bacon, though.

Then I started reading the paper and going through my usual news sites, including Fark. I could feel my mood shifting with some of the stories:

* 5 Killed in Airport Runway Car Crash [Mood: Despair -- Edit: also, Irritation for the autoplaying musical slide show that they added]: This is a terrible story, though it wasn't really the reason why I felt bad. It only warranted a small blurb in the print Post, but the Fark link had more details: An 18-year-old driver, with four passengers, post-party, alcohol-enhanced judgment, and a 500-hp BMW M5, went off the end of a private, 7,500 foot runway, flew 200 feet through the air and into a tree, splitting the car in half, ejecting 3 of the occupants, and killing all 5.

There's also a social media angle to this: The driver, Joshua Ammirato, had posted the night before to an M5 community Web board, wanting to know about rough gearshifting at speeds over 140. There's a thread with the community reaction, and the media have picked up on it, too.

Like I said, the story, though tragic and stupid, wasn't what gave me a sinking feeling in the pit of my stomach. It was seeing pictures of John Travolta's house and the off-runway, fly-in parking for his private Boeing 707.

I'm not sure why. I've never considered myself particularly ambitious, at least when it comes to money. I don't aspire to having plane money (though, I wouldn't turn it down). But seeing that just made me feel like I've been missing something.

I think it has to do with the fact that Travolta has enough multi-engine flying experience that he could be a commercial pilot if he wanted to. Not bad for a fallback career. Meanwhile, I dabble in a lot of things, but I can't think of anything that I'm really passionate about, or accomplished in.

* Allentown Man Charged in Two Homicides [Mood: Amusement]: No, I'm not a sociopath. Look at the picture: 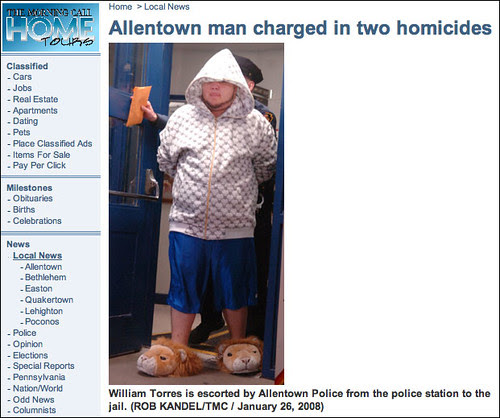 * New Craigslist Personals Category: Women Seeking Hitmen [Mood: Despair]: Another social media-tinged story -- a Michigan woman posted on Craigslist looking for a hitman to whack (sorry, "eradicate") the wife of the man she'd been having an affair with (which had also started online).

To her credit, she didn't come right out in the ad and say "I'll pay you $5,000 to kill someone" (that was for the followup e-mails), but if you're relying on Craigslist to find a hitman, you deserve whatever you get.

Especially for denying us the chance to see grainy surveillance video of the arrest from the inevitable hotel room sting. (Fark discussion thread.)

I'm still feeling a little low, but I think I'm through with the rapid cycling for now.

Until I get to the next batch of links, of course.