I Am Incubating My Brains Out

Of all the Dilbert characters, the one I've least associated myself with is Wally. Until today yesterday: 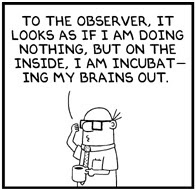 Wally: "To the observer, it looks as if I am doing nothing, but on the inside, I am incubating my brains out."
To that end, I'm trying to think big thoughts about online community and social media, and talking big talk whenever I get the chance. More on that as it happens.

Meanwhile, a few interesting items from yesterday's NYT (culled from my slushpile of topics on del.icio.us):

* Battlefield: Second Life? - EA announced that their Battlefield: Heroes game will be a free download, with users having the option to buy virtual goods (like customizable uniform bits or weapons) and power-ups. Furthermore, it'll be a "fun cartoon-style shooter which caters to players of all skill levels."

From my outsider perspective, it looks like it's taking a page from Team Fortress 2, and not just because of the cartoony graphics that forgo strict photorealism -- but to make it more accessible to people who aren't amped-up 14-year-olds with twitch reflexes, allowing them to still play meaningful roles.

The virtual goods angle is also interesting -- someone can probably tell me where this is already happening, but we seem to be headed to a convergence, through the introduction of persistent, purchasable (or unlockable) virtual goods in traditional shoot-em-up games, and the introduction of competitive or goal-directed behaviors in virtual worlds (like Second Life, where one criticism is that it's kind of... pointless, outside of socialization or acquiring virtual goods for their own sake).

Being somewhere in the middle, MMOs should be already be there, but something still seems lacking. I guess I don't have a strong enough grasp of what's happening in the games space to really articulate what I'm trying to get at. Hence the whole incubation thing.

* Twitter Campaign Reporting: Also from the Times, this is a roundup piece talking about the influence of Twitter on politics and microjournalism. I still haven't drunk fully from the Twitter kool-aid, so I'm still trying to decide what I think. As with other forms of media, we're seeing how the early adopters and first movers are having a disproportionate impact on right now -- as the technology diffuses, its impact will become broader, yet shallower (barring co-opting or concentration by older brands and media).

* Newspaper Survival Strategy: Pander to Boomers: -- It seems a little hard to believe (and I'm not sure that I do), but this Business section article credits an uptick in Newsday.com's readership, in part, to a crappy flash "Born to Be Wild" song parody about baby boomers.

I like cartoonist's Walt Handelsman's editorial cartoons (seen in print and also on that blog), but this is a horrible, horrible animation. But baby boomers are famously self-important, so maybe it did go viral. I wouldn't know -- I'm outside of their intended audience (who knows, maybe it's a Smothers Brothers flashback or something).

Since pandering to Baby Boomers isn't a long-term solution, is the lesson for newspapers to find more key audiences to pander to -- say, the folks who actually forward the e-mails that are featured on My Right-Wing Dad, or people who think Larry the Cable Guy (or Dane Cook, for that matter) are funny?

Perhaps there are fates worse than death for a newspaper.