"The photos will either include an ad overlay on part of the image, or embedded advertising that pops up when a Web user runs a cursor over the picture." 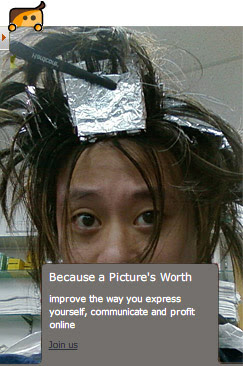 An example, based on what's at the PicApp blog.
Okay, say I really, really, really need a piece of stock art that I can't get anywhere else, and I'll put up with an embedded ad. What powers Corbis' embedded advertising? Flash. Yes, why embed a mere photo in your page, when you can have a Flash widget that looks like a photo, but also serves up a text ad?

Look, unlike some steal anything/share everything folks, I do believe in some theoretical way for content creators to maintain some level of control over their content or even get paid for the use of it (even if I Creative Commons license most of my own photos). But this is just crap.

Good luck with that, Corbis.

Oh, and they also mention potential revenue share, based on clicks to the photo. That leads to item #2...

...from Read/WriteWeb, There's No Money In The Long Tail of the Blogosphere, which smacks down some of the Web 2.0 long-tail sloganeering and says that, while long-tail content aggregation companies may be able to make money, don't expect long-tail content providers (regular folk) to do so. In other words:

"You can make money on the long tail but not in the long tail."
Sounds about right. Hey, apparently (well, according to a throwaway line in Heinlein's The Rolling Stones) the fortunes to be made during the California Gold Rush didn't come from the gold-rushing prospectors, but rather to the merchants who provided products and services to them.

And for all those get-rich-quick bloggers -- unless you find a niche (and you're a first-mover, at that), don't expect to make any money. (I used to cover my hosting nut with Google Adsense ads -- mostly from clicks on my platonic friends pages -- though that hasn't happened for a while.)

But wait -- aren't we in this for ourselves? At the very minimum, aren't we participating in the broader sphere o' blogs, staking out a spot in the global communication? Sure we are. But blogging is time and time is money. I barely pulled a C in econ, but that sounds like an opportunity cost to me -- if I spend 10, 20, or whatever hours a week blogging, when I could be using that time to earn money, at what point does it stop making economic sense to blog (or at least to cut back)? How much is ego-stroking or a creative outlet worth?

Hey, I'll have you know I've made $17 whole dollars from the lonely little adsense ad on my blogger blog. At this rate, I'll earn a hundred bucks by the time I'm 90.

2) Do you suppose this is why most folks stop blogging after a year or two?

3) Do you suppose this is why my blogging has slowed to a trickle?

4) How long you think you'll keep at it now that you don't also have a paid blogging gig?

Blogs are for writers (professional, amateur, and ambitious middle class bureaucrats who know they need to write better memos to get a head). The act of writing a blog provides incentive to keep at it (huzzah 5 people read my post!) and any writing practice will eventually make one a better writer. Imho, the business model for blogging is the lifehacker one, i.e. professional writers supported by advertisers and significant web traffic.

Jamy -- 1. You'll have to subscribe to my premium site. 2. Not unless they went in trying to get rich or famous. More likely it's as the novelty wears off, like after a kid gets a new puppy and has to take care of it. 3. I couldn't say. 4. I also couldn't say.

Matthew -- It all figures into the personal value equation -- if one gets utility out of using one's blog to hone their writing, that's value.

Re: Lifehacker -- knowing what some paid blogger gigs offer per post, it's pretty much a pittance unless you're bringing your own celebrity and audience with you.

There are always going to be Cinderella stories, but just like not every actress/model is discovered in a mall food court or every high school athlete is going to make it to the pros, so too is the problem of separating the myth from the reality.