Casual Encounters: Thanksgiving Driving as a Series of Craigslist Titles

* Late-Blooming SAM Seeks Poss. LTR on the Beltway: I got a later start than I'd hoped, so I didn't really get moving until 12:30pm, which was probably about an hour too late to skate. I lost at least 30 minutes crawling on the Inner Loop. 95 and the Harbor Tunnel weren't too bad, much better than I was expecting.

* Must Love Dogs (Your Pic Gets Mine): Snapped this cameraphone pic in Delaware, which was slow around the $5 toll, but not too bad otherwise: 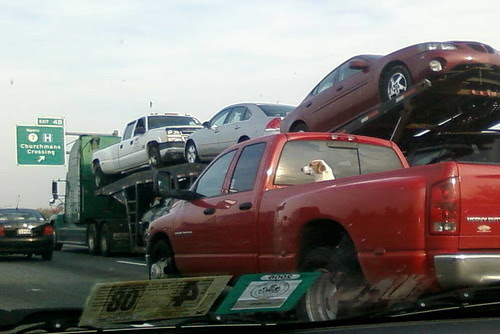 There were actually two dogs in the bed of that pickup, but you can only see the one.
* Rants and Raves: Hey fuckface in the blue Eclipse, zipping by the jam-up in Delaware using the left shoulder -- your flashing hazard lights aren't fooling anyone: Die in a motherfucking fire!!!!

* Missed Connection -- You: Blue Dodge Charger sedan. Me: Red Mazda Protege 5. Where: Crawling between Exits 5 and 8 on the New Jersey Turnpike. Did you feel a real link between us: How you saw how I maintained an even pace, trying not to touch my brake? The sense of mutual trust I felt, that you would pay attention to my needs, respect my boundaries, and not slam into my car? How you didn't lose your cool, even if a couple of cars snaked in ahead of me?