I had a lunch meeting at Cafe Deluxe in Tyson's Corner this afternoon. Lunch was good (tuna steak sandwich, medium rare), but the restaurant is under the Crate and Barrel and has what has to be the worst parking lot exit ever (it bottlenecks out onto International Drive and takes forever).

Oh, and lunch might possibly lead to some work. We'll see what happens.

Since I was right there, I went across the street to Tyson's mall. Went to the Apple Store and played with Photoshop Elements, which I confirmed works on Intel and Leopard, and has the features I need (Shadow/Highlight, primarily). So I ordered it from Amazon.

And just who are all these layabouts who hang out in malls during the workday?

I also stopped by Ranger Surplus, which is on Route 7 next to the old Tower Records. (It's now a DSW shoe store.) I was looking at some cheap German Army officer's jackets, but they didn't fit (right arm length, but too narrow in the not-quite Eisenhower jacket-style waist -- odd).

There was also a box of old patches that looked to be mostly old bowling patches. But a bunch of these caught my eye: 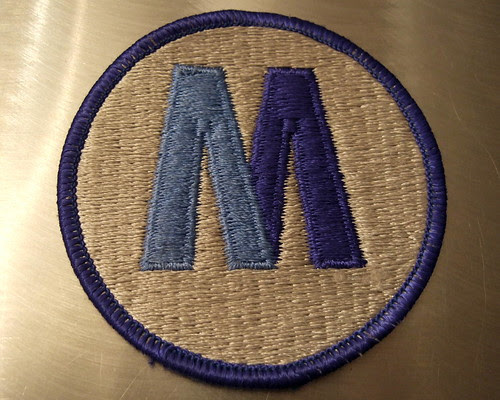 These were really familiar. It took me a minute to figure out -- it's the old logo of the New York MTA -- the Metropolitan Transportation Authority -- which switched to a new logo back in the 90s.

Here's a recent sighting of the old logo, taken by Flickr user soopahgrover: 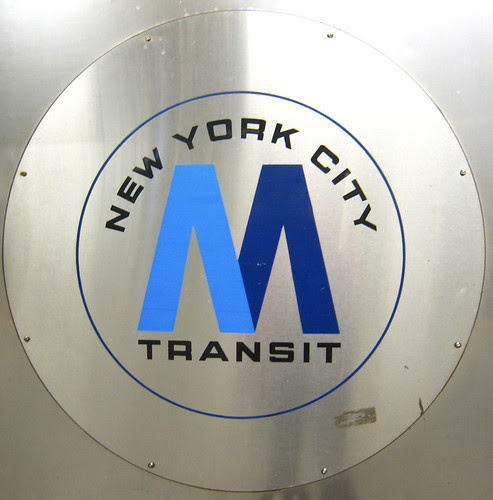 Anyway, I thought it was odd that the old MTA patches had made it down to a surplus store in Northern Virginia. (Maybe they're helping with the Metro extension to Dulles. It would explain a few things.)

I bought it. Set me back twenty-six whole cents.

1. That is the MTA standard ICON.
It is called an ICON. While yes it could be used as a LOGO, it is still considered it's primary ICON.

The MTA was probably changed, because many of it's newer NON ENGLISH SPEAKING citizens, are unable to pronounce MTA, or have important conversations, reguarding the MTA. In fact this is considering it's relationship with the City of Hong Kong.


2. The MTA is a private company within NYC, that is employed by the Public. While it's employees are considered the public, they are not.