Given the recent spike in anti-noose sentiment due to the Jena Six incident (not that there's really a pro-noose lobby, though the War on Nooses did impact a few Halloween displays this year), I was a little surprised to see a noose-themed joke in today's Loose Parts comic, excerpted here:

"You and that fool knittin'! I've said for 30 years, what could you possibly knit that will do any good?"
It's kind of a lame joke, and it's bound to raise the ire of a vociferous, rabble-rousing, and disproportionately powerful minority.

I am, of course, talking about the "kn-word": knitters.

In other comic news, today's Pearls Before Swine features yet another blog-theme -- Goat is prevailing on his blog's readers (and it's good to see he's apparently building his audience) to not be petty when posting comments to his blog: 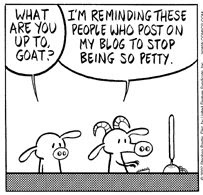 You can guess what the joke in the third panel is.

LOL to both. (Even if there was a publicized hanging within the past month in the "burbs.")

See, that's what I forgot to do today, read the comics! Of course, now I have more insight first.

Talking pork offends me, Joe. I demand an immediate take-down or... umm... well...

Seriously, man. I got nothing. Perhaps you could post a picture of your shoes so I could pick on those.

Anyway, as for the first comic, that cracks me up in all kinds of nostalgic ways. My grandmother taught me how to tie a noose when I was about ten. And yes. It was for Halloween.

What? You didn't think I was just born this weird, did you?