Why are these parked cars all facing the other direction?

I was going to go to the semi-usual Psychotronic Movie Night at Dr. Dremo's, but I bagged it. I mean, if I need to get my fix of early-80s trucksploitation T&A... actually, I don't think this would ever happen. So I'm just having a few Yeunglings and catching up on some photos and such.

Monday night, met up with about a dozen other folks to go see Rogue Wave at the Black Cat. It was the largest group I'd ever been there with -- we ended up parking in the couches at the back through the opening act.

The crowd was typically young and hipster, though we were noting (okay, snarking) at one couple with more of a Real Housewives of Orange County look (even though they both sported underage Xs on the back of their hands).

The opener was Port O'Brien -- they were pretty good. They had, like, 8 people on stage and their lead singer sounded a lot like Neil Young (though, as Nate noted, they played a few upbeat, poppy songs that were very un-Neil Young-ish).

Rogue Wave was also pretty good, though I can't say I really have a handle on their sound. I took a few cameraphone pics, but only 2 came out at all: 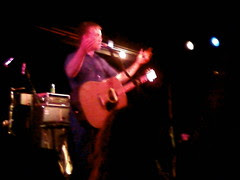 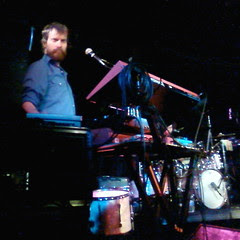 I also didn't get a picture of a small child -- one of the band member's, presumably -- who was being held (by her mom, presumably) backstage (presumably). I was prepared to be righteously indignant, until I saw that she was wearing full earmuff-style hearing protection (fancy slim-profile ones, too). Kudos.

It was raining when we left the club at around midnight. I was parked on T Street. I pulled out and did a K turn to turn left onto 14th Street, when I saw that the parked cars on both sides of the street were facing the other direction.

I had to think about this for a second. Then I saw the One Way signs.