While I've always liked Macs more than PCs, over time, I'd come to appreciate one thing about Windows: Since it basically started out as a graphical shell over the DOS command line, it meant that you could do just about everything in Windows using just the keyboard (including repositioning windows).

Macs have always been built around the mouse (which makes it a little harder to defend the lack of a two-button mouse for so long), and it shows... though OS X does give it essentially a command line underpinning.

Case in point -- for a long while now, I've been annoyed by the fact that using OS X and Firefox, when you try to tab between form fields on a Web page, it skips drop-down menus. Since I was doing most of my stuff on the PC at work, this wasn't a huge problem and I never bothered to look into it, but now that I'm exclusively Mac, I found it intensely annoying.

I did a little searching around for an extension or something to change, so I found to my chagrin that it's just a simple settings change in the Keyboard & Mouse preference in Leopard (and probably previous versions) -- in the section marked, "Full keyboard access: In windows and dialogs, press Tab to move the keyboard focus between:" change the selection from "Text boxes and lists only" to "All Controls": 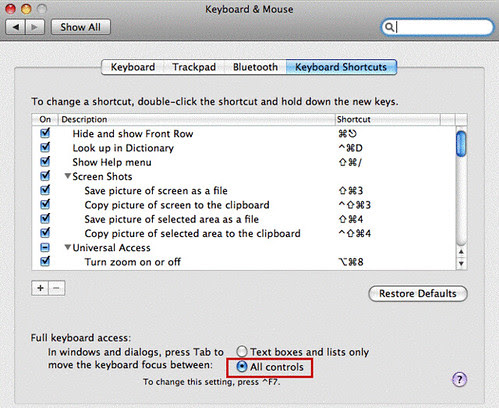 Why this isn't the default is baffling to me.

Now that that's squared away, in System 7 and 8, I used to have an extension that assigned hotkeys to menu items (similar to Windows menus) -- I have to find the OS X equivalent.

dude, thanks for the keyboard tip. i've been wondering about that myself...

You rock! That has annoyed me forever.

I do need to challenge your assumption that Mac OS X is built around a one-button mouse.

No one I know uses the one button mouse supplied by Apple. I have always purchased a much nicer multiple button mouse by the likes of Kensington.

Right click sub menus have been a part of OS X since it was first released. Most designers and other creative types live by right click on a Mac. It works exactly as it does in the Windows world and the right-click menus can be modified...just like in Windows.

Apple has just been stubborn for no good reason to release a functioning multiple button mouse (I don't count the Mighty Mouse as one since you have to do finger acrobatics to get the right click feature to work).

Anon: I said that the Mac OS was built around the mouse, not necessarily the one-button mouse. But I don't even need to weasel out -- look at the history of it, and note that I didn't limit myself to OS X. If you didn't have a mouse in OS 7-9, you were pretty much out of luck.

Also note how long it took Apple to explicitly embrace the multi-button mouse. Holding down the control key to access right-click was a particularly kludgy workaround.

Working in Windows (up to XP, anyway, I don't know Vista), you could do everything -- including moving windows -- with keyboard commands. In some places, it's actually useful -- like hitting alt > File > N to Rename (and where the active letters were underscored).

Thank you!!!! You just saved me SO much time doing my notes for work!!! Thanks for sharing!