Here's a CollegeHumor.com video that's far funnier than it has any right to be:
24: The Unaired 1994 Pilot (link via TotalFark):
College Humor's 24: The Unaired 1994 Pilot
It's a 24 short that portrays the people at CTU trying to do what they do now, except using early 90s technology -- dialup, one-way pagers, pay phones, dot matrix printers (with tractor feed paper), etc.

As a tech user during that era and a former AOL insider, it was especially fun to pick out the anachronisms (though I could not for the life of me remember the term "anachronism" -- unemployment is making me soft).

If you want to get picky, AOL 3.0 didn't come out until 1996 (I was still using 2.5 when I started); Geocities wasn't really Geocities in 1994; they did, you know, have fax machines in 1994; and people were able to get stuff done before online (And even before computers. Or so I heard.) 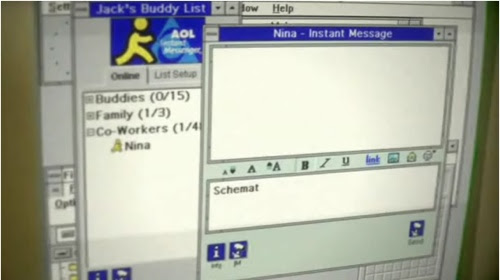 Since I don't even know if you can run AOL 2.5 or 3.0 on a modern machine (I couldn't, the last time I tried -- don't remember if they were ever officially sunset or just allowed to die... assuming you could find an installer -- need an install floppy?), chalk it up to "revealing mistakes."

The references to Lycos, Encarta, and such, as well as a contemporaneous event or two (Nancy Kerrigan, anyone>) were amusing. I got a few chuckles. (But why did the terrorists just disappear?)

College Humor's production values have been pretty good and are getting better all the time. Good job.

This cracked me up. "Print it out - we'll send a bike messenger!"

Thank you for a good laugh!

omg that was hilarious! I might actually have an AOL 2.5 floppy around here somewhere. I'm such a pack rat. eeesh.

Is that Minesweeper I see in the background?

Yeah, it sure is Minesweeper. You can see it clearly in the video.