I'm backing up my hard drive in preparation for upgrading to Mac OS X Leopard, so in the meantime, here's an item that's been sitting in my topic slushpile.

I saw an item on TotalFark about a different type of traffic intersection installed in St. Louis last month (there's also one up in Accokeek, Maryland) that might help things along -- a continuous flow intersection.

It addresses the problem where traffic that's turning left interferes with oncoming traffic (even with left-turn lanes and arrows and such) -- if northbound traffic is turning left, southbound traffic has to stop (except for those folks turning right), tying things up.

By essentially extending the intersection and moving the left-turny part up a few hundred yards up the road, it moves the left-turn folks out of the way: 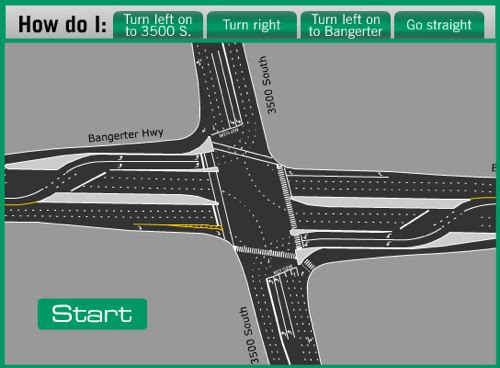 Here's the actual tutorial animation.
It's one of those things that's really hard to visualize, even with photos -- Flash animations really help here:

They're kind of odd to look at, and they involve a kind of double-traffic light, but seeing the animations show how they work. They take up space, though, so I guess you'd only see them at major intersections. I'm also not sure how pedestrians and cyclists fit into the picture. But I'm for almost anything to help improve the efficiency of traffic (until our flying cars get here, of course).