A bunch of us met up at Whitlow's on Saturday night, to celebrate Conor's visit.

I was the first one to arrive, at a little before 10pm. I settled in at the bar just as some guy next to me was getting kicked out. I didn't see why. Though he was wearing a visor, which may have been part of it.

Now, I'm fairly certain I haven't been drinking that much more in my enforced downtime, but I really wasn't feeling it. Even after a few beers, a round of Tuaca (I suggested the round, which I never do), and some sample shot of some caffeinated vodka that some drink reps/shot girls were handing out. (It was kind of nasty. Also weak.)

There are some photos. Here's one I took: 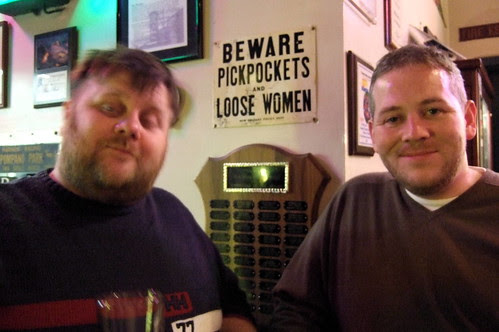 Annoyingly, while waiting to get into the men's room, on two separate occasions, someone saw me standing and started in on the "Hey, this is the men's roo...", before they saw that I was, in fact, a male, and just sort of trailed off.

I played dumb and didn't pursue the matter. I know I need a haircut.

At the end of the evening, some guy who may or may not have been associated with the bar came in and started yelling, "You have 5 seconds to finish your drinks and get out of here."

Other people at the bar took offense to this. There was a lot of chest bumping and such. The yeller got hustled out.

I drove home, quite sober, but way low on gas. The needle was on E and the low fuel light was on. I knew I had some leeway according to the odometer, but I drove really conservatively on the way back.

You might be drinking a bit more. Boredom will do that for you. So will unemployment.