September 9, 1999: Big (well, medium-sized) changes were afoot, though not until the afternoon. For the AM, we went with a generic airliner stock photo supporting an equally generic travel promo: 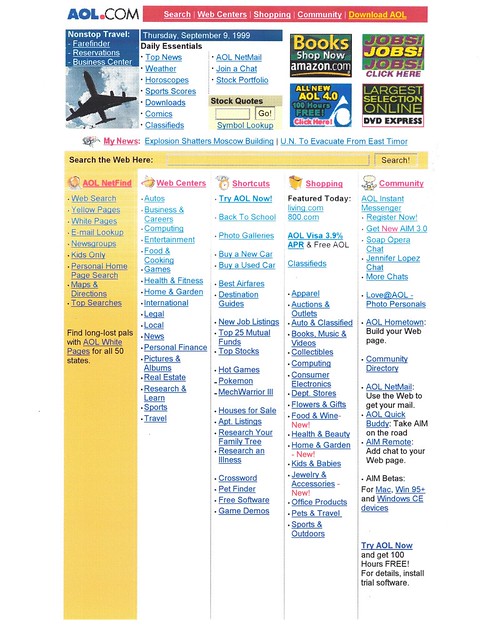 For the PM update... well, the top promo section didn't change much, with the Sonic the Hedgehog photo for a Games article about Sega Dreamcast. [Edit: So I didn't realize until just now that it was the actual Dreamcast launch. In my defense, the promo is so low-key that it was easy to miss.]

However, below the search bar (and note the snazzy little negative space arrow on the left side), we shifted from the five equal-width column layout, to a horizontally oriented one with a wide Web Centers listing, and two remaining columns (that didn't match up with the columns above, ugh) for Shop@AOL and AOL NetFind: 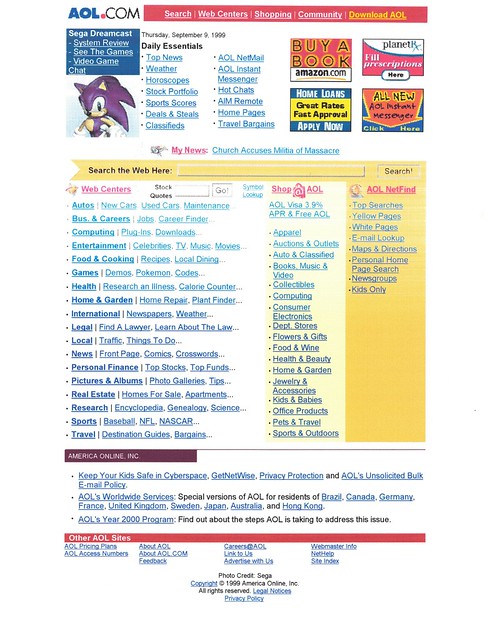 This had the affect of shortening the page (which was the whole point of the exercise); it also let us expose more of the Web Center subcategories and shortcuts (which previously had their own column). As to the community products, some of them made it into the Daily Essentials lineup (we created some extra space by moving the stock quote search box into the Web Centers column... it's just kind of floating there randomly) though others didn't.

It also means that the bottom of the page is once again visible on a single-page screenshot. Until we started adding crap to it again...

[Series note: In the late 1990s, I programmed the content for the AOL.com home page, which relaunched with a new design on July 14, 1998. I printed screencaps and saved them. 20 years later, I'm scanning them in and posting them with a little commentary under the tag #20YearsAgoOnAOLcom.]
Posted by Joelogon at 9/09/2019