July 18, 1998: The first Saturday home page, which means it was scheduled on Friday. You can also see in the printout header that it's a screencap of the offline HTML template mockup that I used for copyfitting.

There's a fairly small but telling change that was added in the days after launch that most people would miss (I nearly did just now): Just below the nav bar, and above the promo block, we added a tiny text line that says, "America Online's Internet@Large Experience."

It looks like a slogan, but it's actually more of a disclaimer: I forget exactly why we were told to add it, but I think it had something to do with the fact that some of the execs were concerned that people would confuse AOL.com with the core AOL service offerings.

Of course, this little line of text would do absolutely nothing to alleviate that; it was a tiny piece of ass-covering that we were told to add. 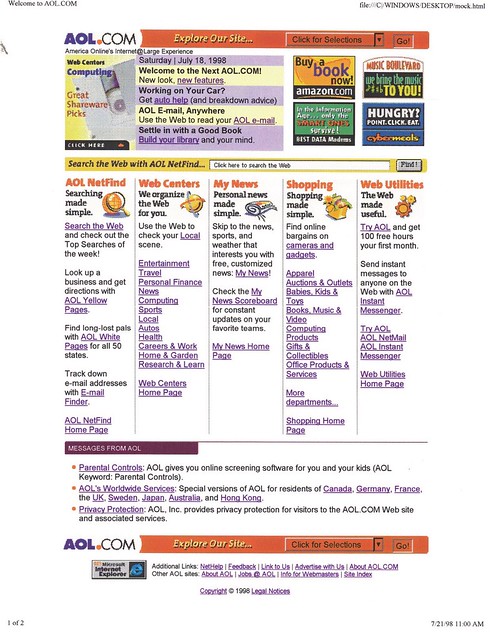 Ad spot of the day: Lower right in the ad block, the ad for Cybermeals: "HUNGRY? Point. Click. Eat." Yeah, like that would ever become a thing.