It featured a new home page that I did the content for; at the time, that just meant writing the 4 daily text promos and text/graphic promo spot (more on that in the future), and some text promos below the fold that rotated on a weekly-ish basis. Everything else on the page was static (well, except for the four ad spots in the top right): 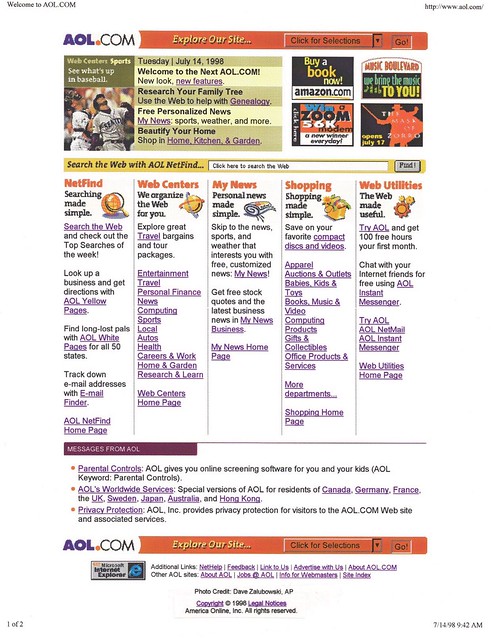 Depending on the specific time period, there were actually a few different versions of the home page: one view for non-AOL members (people using external, standalone browsers) that was mostly an ad to sign up for AOL (this is the version that the Internet Wayback Machine would tend to crawl); an AOL member version seen by people using the (much-hated) AOL client web browser; and later, a version for AOL members signed in to their Webmail accounts using external browsers.

The promos that I wrote were most visible in the member signed-in views.

Anyway, I'd write the promos in an HTML template to make sure the copy fit, then paste it into our publishing tool (I think we launched with the Java-based Shakespeare), then use a push tool to publish it to the staging server, then out live to production.

As part of my process, either from the preview staging server or after it went live, I'd take a screenshot and print it out. (This July 14th launch version was definitely the live version, as you can see from the header URL.) I don't think I kept the soft copy screenshot, just the hard copy, which went into a folder and that I kept, even after all this time.

(One other thing: The footer with the legalese often printed to a second page; you can see here where I cut it out and taped it to the first page.)

Anyway, to commemorate the launch, and to open that time capsule from the late 1990s, I bought a new scanner (after I upgraded to High Sierra, my original 4-in-1 wouldn't scan anymore) and now, mostly as a writing prompt, will be publishing an image of the AOL.com home page from that day, 20 years prior, with a little commentary as appropriate, and as best my faulty memory can recall. (I'm also publishing all the scans to a Flickr collection: 20 Years Ago On AOL.com)