After annoying my friends with incessant "nano... nano" IMs, I finally rejoined the iPod nation (I've been without since I lost my Shuffle for the second time) -- I picked up a black 8 gig iPod fat nano at the Apple store in Tyson's Corner last night: 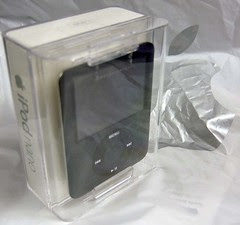 Leaving aside the fact that it was a repackaged return -- complete with fingerprints, fully-charged, formatted for PC, and identified as "Bill's iPod" (I decided not to care and just reformatted it, renaming it "JoelogoNano") -- I'm now playing with it.

Carrying Case: Free Is Better Than Cheap
I don't have any accessories, save for an all-purpose car charger I picked up for future need, so I did something I'd done with my old shuffle: I took an extra ID badge holder (the clear vinyl kind with the zip-lock top and clip -- any good cubicle dweller will have some) and used it as a carrying case: 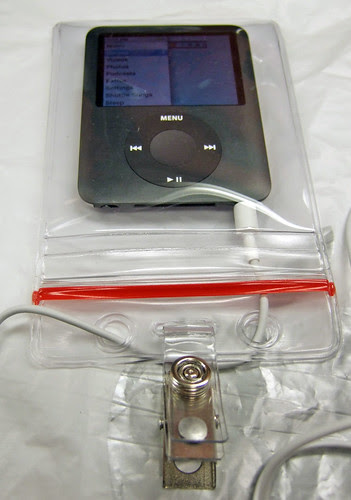 Show the screen through the back side of the case, which is clearer -- the front side has kind of a matte finish.
It fits perfectly. Note that it's upside down -- this is because the nano headphone jack is at the bottom. This actually works out, which I'll get to in a moment.

I also looped the headphone cord through the lanyard holes, to provide wire stress relief.

Here's what it looks like, clipped to my cargo pants pocket: 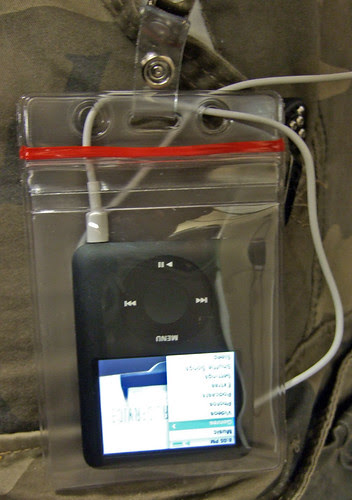 Dangly.
"Hey dumbass, it's upside down!", right? Ever wear a wristwatch on your belt? (I did for a while. Nickel allergies.) Same principle -- when you lift it to look down at it, it'll be right-side up: 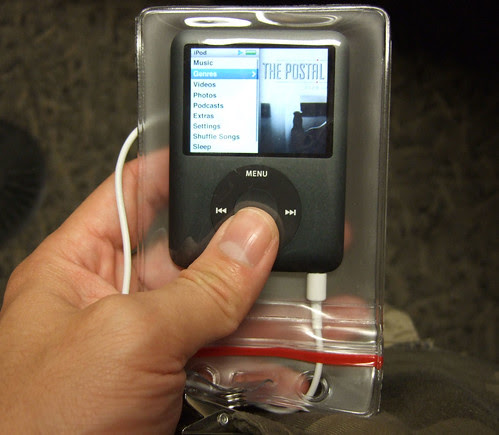 Down is up.
The scroll wheel and buttons works fine. You can see the screen perfectly -- the vinyl actually sticks to it (I don't think it'll leave any residue), so it doesn't slide around (which was a problem with the old shuffle).

The clip is secure enough, though I'll put a rubber band around the snap loop so it can't come loose by accident. You can also run a lanyard through the holes if you want to wear it around your neck, or maybe put it on a retractable reel.

Now, I don't know that I'll be wearing it too much this way, since I mostly just got it for car use, and you have to take it out to dock it, but it works as-is, with no modifications. And what more do you want for free?

I love it! Absolutely genius.

very clever! and that's a good-looking ipod... they sure have gotten sleeker since i bought my dinosuar.

I just ordered my new nano and was wondering how I would carry it. Unfortunately, I don't have any of that type of id holder at the office. They give us another, much less flexbile, kind. Will you snag one for me? Pretty please?

Red: Thanks.
Charlotte: You should see my old rio riot-- it's the size of a paperback.
Jamy: I'll see what I can do.

I added a retractable belt clip to complete my case. http://www.flickr.com/photos/k4rl/1518617631/in/photostream/

Jeff -- cool; just don't forget and try to badge in with it (unless your badge fits, too... but that would be madness!)

So, is this the new version of the pocket protectors?
-- Robin