I didn't end up going to the DC Zombie Lurch this year (sheer laziness). I did, however, dress up as a zombie for parties later on. I kind of waited until the last minute and it shows a little bit, but I didn't worry about it too much: 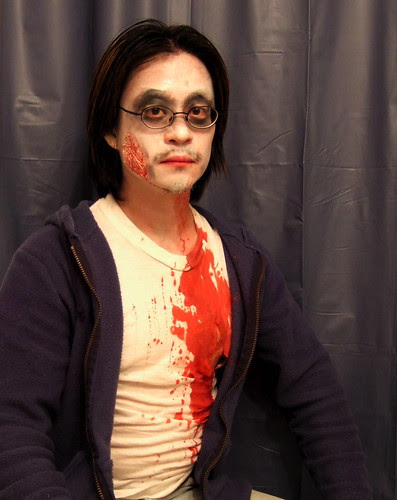 Post-Halloween Costume Assessment
I basically went as Generic Hoodie Zombie. The eye makeup was kind of a disaster, but what are you gonna do? It was a rush job.

The cheek wound was just some toilet paper and spray-on bandage, splattered with fake blood. If I'd given myself more time, I could have made it look like a true gaping wound, but here it's more like a wrinkled road rash. I had a neck wound done similarly, but it didn't look as right. Both didn't stand up close inspection, but were okay from the middle distance.

The blood was just corn syrup, red food coloring (with a drop of blue), cocoa mix and a tiny bit of strawberry jello mix.

I even carried a little film container of it with me, in case I needed a touchup or tasty dessert topping, but I didn't use it.

The tear in the t-shirt is for a chest wound that I didn't have time to do, so I just slapped a big band-aid over it (someone later asked me "Why do you have a teabag in your shirt?")

I put a towel down on the seat and drove out to Leesburg. I was thinking about potential reactions by cops or paramedics, when I nearly hit a deer that was standing in the middle of the Greenway. Fortunately, a minivan was passing me, and its headlights gave me enough warning to get out of the way.

A few photos from Jason & DeAnna's party are here.

Hey, don't be so hard on yourself. That's actually pretty good zombie-do. For a couple of years, I did makeup for Red Cross youth First Aid competitions. One of my best creations was using a chicken bone to make a bloody, broken wrist.

not a bad look for you yerman! saw a classic in a paper yesterday, some German dude, dressed as Zombie coming home from a halloween party in the train, passed out drunk ans was mistaken for a murder victim - woke up with cops and paramedics all over the place ... good stuff!