If I have to explain it, it's not going to be funny:

It's censored out of the photo, but Inignot is flipping the bird as hard as he can.

Well, okay, I'll explain it a little bit; there was a bomb scare in Boston today, due to a couple of "suspicious objects."

They look pretty cool at night. However, in the daytime, they looked threatening, since terrorist bombmakers today like to use Lite Brite sets to make their bombs as conspicuous as possible.

So, since we live in a state of constant fear, there was a great big hassle, and Boston freaked out (though it turns out that these signs have been in a bunch of cities, for 2-3 weeks.)

Anyway, despite being big ole 'fraidy cats, the stalwart American people will not be deterred!

Remember, there are no false alarms, only terrorist dry runs! The price of liberty is eternal vigilance! We must defend ourselves against terrorist sprinkler parts and animated cartoon characters with five... thousand dimensions. 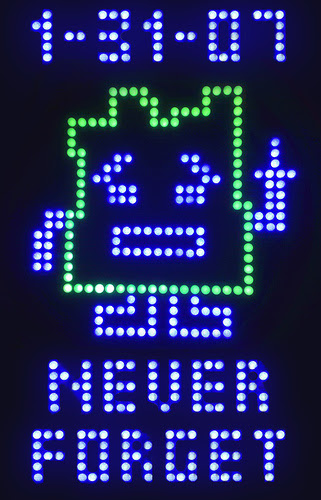 Call the Police… Or homeland Security…. Call Somebody!!!!.
There is a Bar on the Corner of 5th and Lexington with a Neon Beer sign in the window. It could be a bomb. After all it is all lit up, and has wires sticking out of it, and it glows. It could be dangerous.

I hope my sarcasm is extremely apparent