I'm watching the Duke-Boston College basketball game right now (Duke's up, we're 4 minutes into the second half), and during a commercial break, I learned that I can get an Affinity heat pump by York in one of 7 custom designer colors, or more importantly, sporting the logo of your favorite NCAA Division 1 college.

They include a handy preview widget: 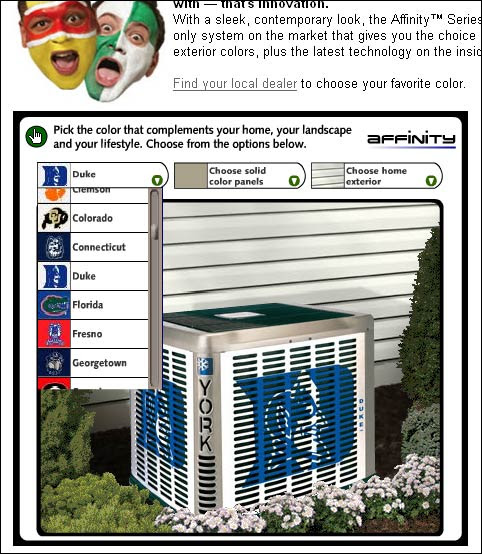 Operators are standing by.

As it happens, York is now a subsidiary of Johnson Controls -- you may have seen the name on a thermostat somewhere, though they have their fingers in all sorts of pies. A girl in one of my classes back in college grew up in the Marshall Islands -- her parents worked for Johnson Controls, presumably supporting one of the military bases or missile test sites out there.

I always thought it was kind of sinister -- it had that Omni Consumer Products feel to it.