As I mentioned last week, I went to the Washington Post's "First Ever DC Blogger Summit" last night. (Obligatory "dumb things" content: I got there an hour late, partially because I got a late exit, and I forgot how much I-66 eastbound sucks at rush hour -- not to be confused with I-66, who was also there and does not suck -- and I also neglected to write down the cross street.) So I got there at 7pm, during the break after the first session (a panel of Post bloggers): 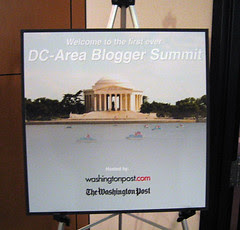 Random Observation: The audience was very male, surprisingly so. The word "sausagefest" comes to mind.

The second session was a "meet a real-life lawyer"-style presentation on blogging and the law. (I don't have his name, since I didn't grab a packet). It was informative, insightful, and as these legal presentations usually do, simultaneously sucked the air out of the room and scared the hell out of people.

I've participated in a bunch of presentations on legal issues on blogging and social media, so I do know that people do get sued (even people who aren't, say, Perez Hilton) and that there are real pitfalls and liabilities, and that people should watch what they say.

However, I thought that the session, which focused on defamation and libel, was not as well suited to this audience, especially since locally-based bloggers on national political topics had been specifically asked not to attend.

For those of us who aren't political reporters, more stuff on copyright infringement, the much abused concept of "fair use" (see the fair use comic book), dealing with frivolous DMCA claims, and where to get photos that aren't , you know, stolen, would have been useful.

Blast from the past: Remember the Communications Decency Act? The parts that were upheld are a good thing, since that's where safe harbor provisions for ISPs come from. (Thank you, pandering to telecom corporate interests!)

Questions asked and answered included:
There was also a plug for his book on legal issues for reporters, which he apologized was pricey -- I was going to say, it's okay, we'll scan it and put it online, which would have been both snark and a comment on the lack of more discussion on IP, copyright and fair use issues. But I didn't. 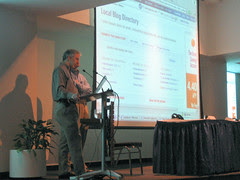 Here's a photo of the Local Blog Directory mockup: 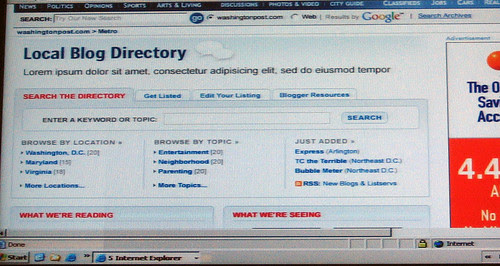 Some additional comments:
The Social Portion

Afterwards, we decamped for the Post Pub; I didn't get very many pictures, but between the event and the bar portion of the evening, other bloggers I encountered included DCist's Sommer Mathis, Celeste Dawn Mitchell, Miss Chatter (sporting very pink hair), Hey Pretty, Jeff, Wayan and a metric shitload (oops, darn that profanity) of Metblogs DC folks; Rob Goodspeed, plus a bunch of Posties (they love it when you call them that), including Jim Brady (who hasn't been in the middle of blog dustup in, months now) and entourage.

Also, a special hello to Mike Grass, the Express dude who I'd been giving a moderately hard time via a few comments to a recent entry where he'd complained about VA drivers on the trip back from Michigan. He seems like a nice guy... even if he was the one who mistook me for a girl in a local blog log item a while back -- I hadn't realized he was the one until he owned up.

Overall, I think it was a useful event, and I like to see if these continue as the Post gets closer to rolling out their directory. Metblogs DC wins the DC group blog attendance award. It's a good thing I brought enough business cards, since that's what I was taking notes on.

Finally, you still can't say "Man Ass" in the Washington Post (but you can say "Manassas.") I don't know what means in this context, but that's just the wacky, irreverent, spontaneous content that makes blogs so... bloggy. Can't you feel the decline in readership and subscribers reversing as we speak?