I was on the way home from the DC Blogs Summit -- I'd parked my car in Clarendon, but ended up Metroing to Rosslyn since I didn't feel like waiting for the Orange Line. I also thought I would try for some photos. In retrospect, this was probably a mistake, since it was cold and my feet hurt.

And I only got one marginally usable photo: 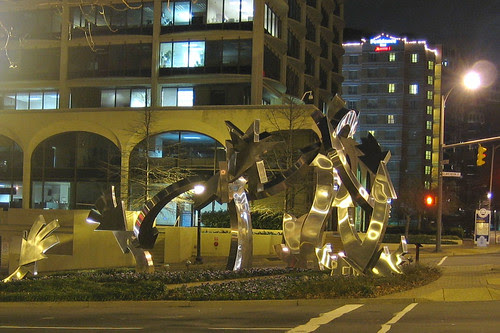 I was at the intersection of Clarendon and Barton, when an SUV full of guys rolled up next to me at the red light, asking... something. I couldn't quite make it out.

Since they were apparently Middle Eastern by way of Eurotrash, I finally figured out they were looking for Guarapo, so I told them they'd passed it, and to take a left on Barton and go back around on Wilson.

I'm not sure if they understood me or not (I even pointed and used hand signals).

However, one thing I am quite sure I did not say was "Keep going straight on Clarendon, through the red light," which they did... directly in front of an Arlington County Police cruiser (marked, even).

They immediately got pulled over.

I felt vaguely bad (even though it wasn't my fault), but it was cold, so I didn't stick around to see what happened.

Lastly, I did manage to catch a snowflake in my hand -- I wasn't sure if it was snow or ash from a fireplace or something, but it was a snow flurry.