The Only Person I'm Stalking Is Me

Saturday, I went to my friend Reed's place in Dupont Circle for a party. It was a party for his birthday, though not necessarily a birthday party.

I'm there for about 30 seconds, saying my hellos. As I go to drop off my jacket, I catch a glimpse of someone who looks familiar, but nah, that can't be him. Re-enter the room, and suddenly from behind, there's a pair of hands over my eyes and a voice telling me "Bet you don't know who this is."

My previous glimpse confirmed, I forego the double-arm trap/elbow smash to throat/knee strike sequence (it would have been rude to the host) and say, "Wayan, get your hands off my glasses, you're messing them up."

So that's where the DC Metblogs item ('A small DC blogging world after all') and photo stems from: 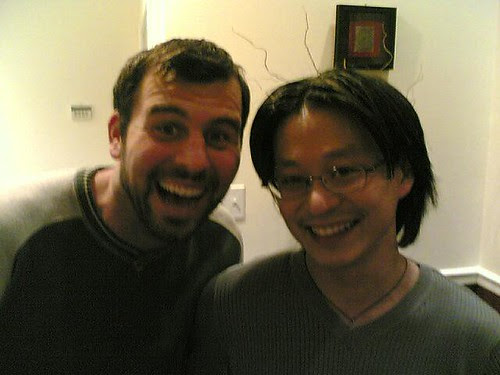 Photo by Wayan. Notice the tendrils growing out of my head.

The DC-area Blogging-with-a-Capital-B scene isn't all that big, so I'm not surprised that I've run into Wayan a few times, though the random house party encounter was kind of odd. But am I stalking anyone? Not presently, though if you would like to be considered for stalking, please send me a mail or leave a comment and I will get back to you as soon as I can.

However, this does give me an excuse to dive into my draft post pile.

Interesting (If You're Me, or Stalking Me)

When I do vanity searches, I find that looking for Joe Loong finds me pretty well -- I own the first view of results, with a mix of work and personal stuff.

However, Joseph Loong does considerably worse, in that you can find me, but only in a roundabout way.

The explanation is simple: I really only use Joseph on official documents and such. Since middle school, I've pretty much always gone by Joe, which carried over to my cleverly-constructed online handles ("Hi, I'm Joelogon." "Cool, what's your name?" "Um, Joe."), Web sites, and later my blogs and online profiles.

Of course, my business cards say "Joseph" -- I will have to consider the implications of this.

It's partly because of the proximity of my personal stuff with my work stuff when you search on my name that's got me re-evaluating this whole concept of trying to keep your work stuff separate from your personal stuff online, which is a fading concept that I still cling to.

There are plenty of folks out there, the A-List bloggers and such, who've fully embraced the concept of using their names as brands for everything they do, such that there really isn't a distinction anymore between their work/non-work, or even public/private lives. It's very Hollywood-ish.

Though I've noticed that:
I should be more used to this, I guess. I've never been particularly difficult to find, even in pre-Internet days -- there just aren't that many Loongs in the phone book in the U.S. -- lots and lots of Leungs, but not many Loongs.

So back in the day, I was the only Wayan online. And I mean the ONLY.

Now that Indonesia is coming online (Wayan is Indonesian), people forget its the Wayans, not Wayan Brothers, and Wayan ID is claimed as a city by splogs (its an empty zipcode), the Wayan field is getting more crowded.

I still hold the top Wayan spot with one of my websites, but from then on it gets crowded. Wayan Vota is still all my own.

Oh, and sorry about the glasses, I was just excited to see ya!