An Obsessive Look at My Chewing Gum Methodology

I chew a lot of gum.

Not only does it help me concentrate, but it also helps prevent my lower incisors and canines from growing up into my brain, which would be fatal.

Also, it makes me look exceptionally attractive in photos where my mouth is partially open and you can see it betwixt cheek and gum.

Chewing a lot of gum means carrying a lot of gum. I found out quickly that just slipping packs of gum in my pockets wasn't a good idea. Unless you like lint gum.

For a long while, I used Starbucks After-Coffee Gum; I would buy a pack, rip through the gum in an afternoon and save the tins, which were pretty cool; I don't have any more of the ones with the translucent plastic band near the top (the plastic, alas, was a failure point), but I do have some of the all-metal ones: 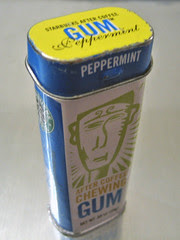 I'd keep the container in my back pocket; it wasn't the most ergonomic thing, which explains why most of my jeans now have holes worn out in the back pockets.

I went looking for some different containers: 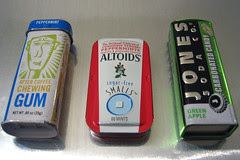 The Jones Soda Carbonated Candy container is really neat -- The lid fits inside the tin, not over the end: 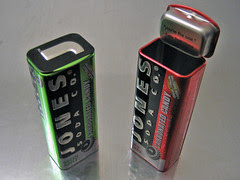 Unfortunately, it's roughly the same shape as the Starbucks container, with the same attendant problems.

Also, both the Green Apple and Fufu Berry flavors taste like ass.

The Altoids Smalls container is the perfect size, though it doesn't work with stick gum. (Cutting the pieces in half wouldn't give the right size, and custom cutting each piece would be silly and not worth the effort. Not that I would know because I tried it for a while or anything.)

However, 8 pieces of Trident gum will fit into the tin perfectly: 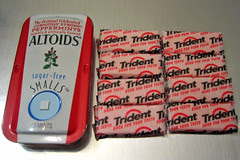 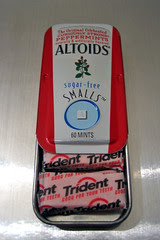 This seems to be the ideal configuration for me; the only possible problem might be if I were, say, lying awkwardly on my right side, trying to get a low-angle shot of some flags flying at half-staff because of a president's death, and I bent the case out of shape so it wouldn't open without a screwdriver.

And really, how often does that happen?

I can't believe someone else has put the samem amount of thought into this as myself!