When we last left my very manly Sunday (two weeks ago), I was on my way home from the canceled Over the Rhine show at Jammin' Java.

Driving home on Route 7, I passed by the Tower Records and saw the "Going Out of Business" sale signs: 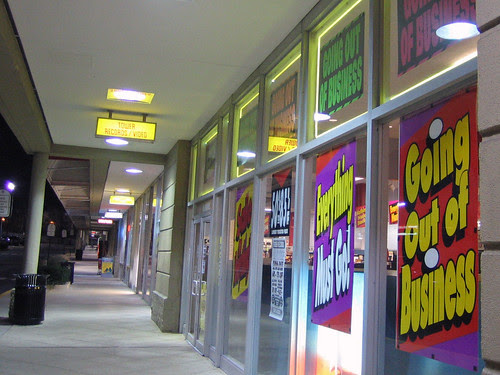 I'd thought they'd already been liquidated, so feeling a powerful mix of nostalgia, curiosity, and bargain lust, I pulled a U-turn.

I hadn't been to that particular Tower in a while, but I always liked going, especially when I worked in Vienna, because:
So I'd spent my fair share of time and money there in the past -- though there were plenty of occasions where I would just go in, browse for a little bit, grab a free City Paper and leave.

They were in their last 10 days (which means they're toast now), and as the sign said, "Sorry, we have NO new releases": 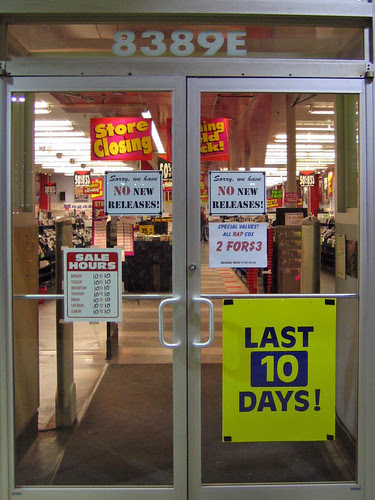 Inside, the shelves were pretty bare: 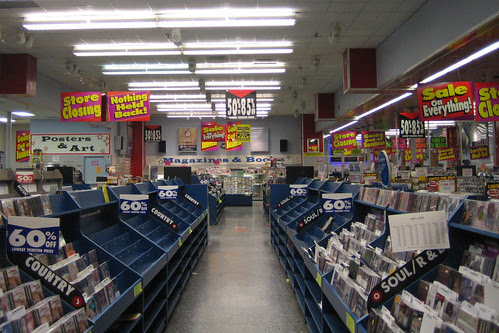 CDs were 60% off, DVDs 50%, magazines 90%. This, of course, meant that for the first time, Tower was selling reasonably priced merchandise.

The bare shelves and the fixtures tagged for sale made it a pretty depressing scene -- you can check out the DCist article that came out a week after I went (Tower Bids Final, Low-Priced Farewell), as well as the Post article (For Tower Records, End of Disc) -- they both have the tone and substance captured pretty well.

My purchasing calculus went like this: At 60% off, it made new CDs slightly cheaper than trying to buy them used. Not sure if they still got SoundScan credit, though.

I could have waited a few more days to get a deeper discount (20%, as it turned out), but I didn't feel like losing out, especially after an hour or so scavenging.

I ended up buying 10 CDs. The first two were 2 bucks each; the rest averaged around 7 bucks per, so the final damage was about $66: 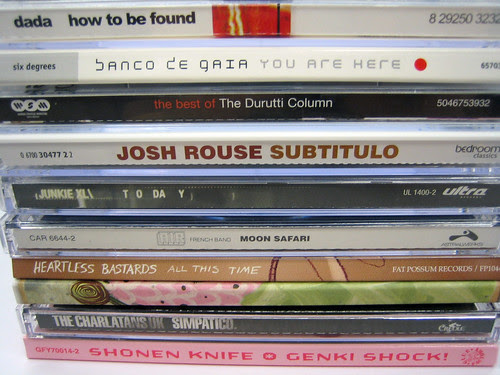 I pretty much stuck to artists with whom I had at least some familiarity, and I ended up with:
So it was a pretty fruitful trip.

I'm going to miss Tower, though vulturing the liquidation sale brought me back to New York, where across the street from the Tower records at West 4th, there was a Tower Clearance Outlet that had some really random stuff (including dirt cheap pr0n DVDs -- score!) upstairs. It used to be a staple of my NYC visits.

Anyway, I wonder what's going to end up in that space.

Tower is still up and running in Dublin. Still, it pales in comparison to Tower and Amoeba in San Francisco. Have a great holiday!

There's just something about a good record store. (And then there was Tower.) -- Joe

I worked at that store up until the end. Thank you for your kind words about it.

Spent a lot of time there... lots of good memories. Thanks. -- Joe