It Might Be a High-Tech Dinosaur, But It's Definitely My Damn Photo

Look, I don't care if you take one of my Holiday Prom Photos to torture an analogy linking AOL to aging space hardware:

I mean, it's on Flickr and publicly available, and even labeled with the relevant tags (though I haven't gotten around to writing descriptions yet), so it's meant to be found and used.

The goddamn thing is even under a Creative Commons Attribution-ShareAlike 2.0 license (it doesn't even stipulate "noncommercial use only," whatever that means anymore).

But if you do that, and use it as the seed for a bit of snark, you could at least get the attribution right, since I am not Mukesh, who I'm sure is a good person, but did not take that photo: 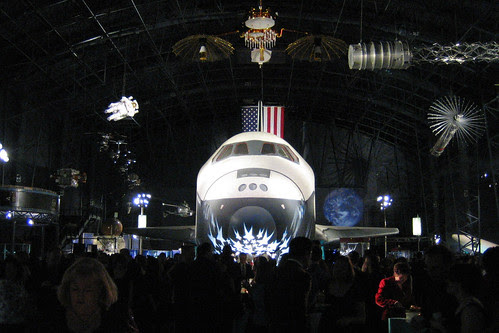 For most people, this will probably be the best photo I took all night (unless you like looking at drunken party photos of people you don't know); I know the Valleywag photo is mine because of the person lit in red in the right foreground, which was a nice little bit of serendipity.

(You're also using one of my thumbnail pics below, but you didn't try to incorporate it into the copy, so whatever. You also used one of Frank's pics, but you took that down.)

I was going to blog about the party later in the week (I'm trying to stay roughly in chronological order and I'm a week behind), so damn you for making me go out of order.

Don't feel bad. They're getting their AOL hunks names wrong too.