An Unexpected Gift of Electronics for the Holidays

So as I was leaving my house last Thursday morning, I found a surprise out front next to my recycling. And I don't mean the pile of dog crap on my lawn (though thanks for that, kind stranger): 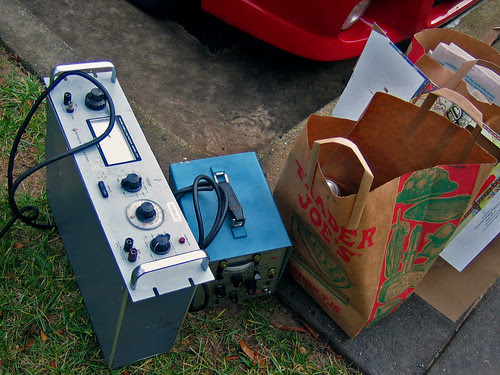 The stuff in the bags? Mine. Everything else? Not mine

Apparently, one of my neighbors or other passerby dumped some of his (I'm assuming "his," sue me) old electronic equipment next to my garbage.

The garbagemen had already come and gone, so unless the recycling people were going to take it (and that would be "no"), it was going to be my problem.

I didn't have time to deal with it, so I took the pics and went to work. I figured the stuff would still be there for me to deal with when I got back. And it was. 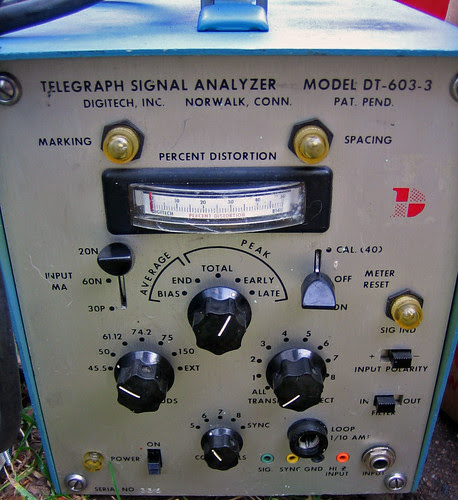 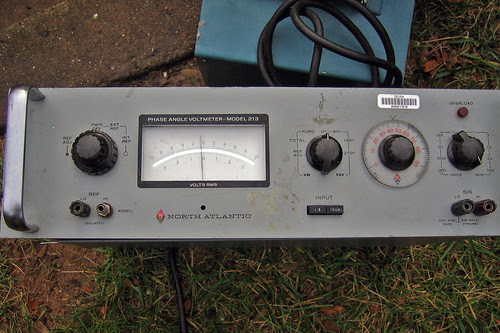 Of course, they were both still there when I got back, slightly moist from the weather but otherwise fine. Since I was stuck with them until next garbage day (Monday), I took them inside for a closer look.

The phase angle voltmeter is a model 213 from North Atlantic Industries (the product page is for a non-obsolete version).

I couldn't find any info about the telegraph signal analyzer, which is infinitely cooler looking.

On the off chance that it was some perverse junk bombing attempt, I took the casing off to take a look at the insides (which I realize would not have helped if it was actually a bomb).

It didn't explode, either then or when I tried plugging it in, so I took the opportunity to clean the casing (there was some particularly nasty sticker residue on it).

So, I still have the two pieces. I haven't decided if I'm going to hang on to them (the signal analyzer looks like it's in pretty good shape) and try to sell them on ebay, or try to take them apart and do something interesting and artlike with them.

However, realistically, I assume they're just going up as two more pieces of clutter for my house.