My Mom Subscribes to Stuff Magazine

It's true: My mom subscribes to Stuff Magazine: 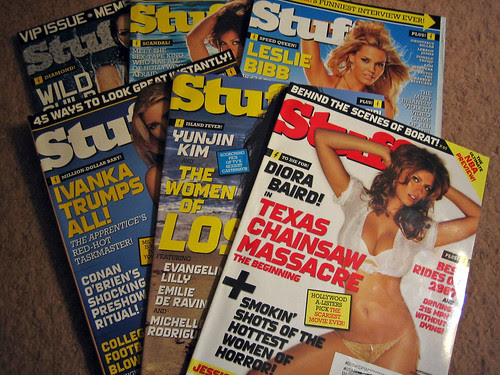 Apparently, she had some expiring credit card points to burn on magazine subscriptions, so she picked Businessweek, Fortune, and then a few other random titles.

At least, that what she says.

It must run in the family, since that's how my uncle in California ended up with a subscription to Essence. At least, I think it's Essence. I was just told a Black-interest magazine, so it could possibly be King.

I got a late start home, leaving Virginia a little before 3pm. I hit some traffic on the Beltway, then lost 40 minutes sitting in traffic on I-95.

Everything else was fine, excepting the usual slowdown at the Delaware tolls, so I made it home in just under 5 hours.

Also, there are now 4 open wireless connections available to us, though the parents now have DSL (which is primarly used by the sister and me when we visit, though we're working on that).