It hasn't been a very good week for sleeping, for reasons which I will talk about later.

A few nights ago, I found myself up and about in 3am territory. In between late-night episodes of 'The X-Files' on TNT and 'Girls Gone Wild in Outer Space' infomercials on Spike and Comedy Central, there was this infomercial, which was short on details but long on cleavage: 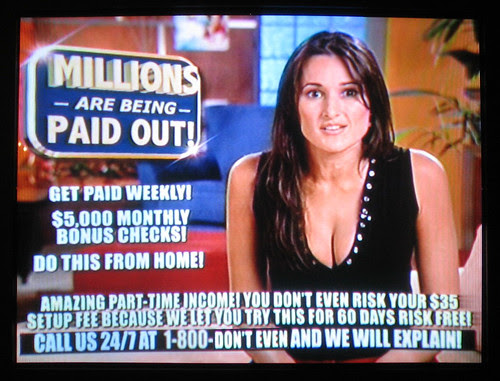 The commercial is basically the chick giving one continuously looped pitch, interspersed with a few testimonials.

They never say what the job is, though from the pitch, I gather it consists solely of sitting at home and collecting all the checks and bonus checks they send you.

She's very big on the bonus checks. Apparently, it's all the company does -- send out bonus checks. I was reminded of the First Citiwide Change Bank parody ads on SNL -- the bank that just makes change, and makes money on "volume."

Now, there was no way I was going to call the 800 number (which, in case you can't tell from my artful photoshop job, I changed), so today I did a google search on "millions are being paid out" infomercial.

According to the Infomercial Blog and Infomercial Ratings, it's a vitamin MLM thing. (Which I would call a scam, but that would probably upset any true-believers who see this. Suckers don't like being told that they're suckers.)

I did take a look at their Web site (which I'm not going to link to); in one of her other videos, the chick, Tylene Megley, says she's a 37-year-old mother of two. (Hey, maybe she'll be one of my connections on LinkedIn.)

If true, she's either in pretty good shape or has a good plastic surgeon.

They have another video online, where she's with an equally bodacious woman and they're talking about all the great money they can be making, then they get naked and start having big boobed girl-on-girl action. Or maybe that was the Girls Gone Wild in Outer Space thing again.

Anyway, the only other thing to say is that I keep trying to type "informercial."

Her boobies seem a bit uneven...

I love the audacity of these infomercials. In almost every case, they cloak their true nature better than a Klingon battle cruiser and give no hint of what's involved in joining the "cash income business."

I looked at one of the web sites. It had a form seeking personal information and in exchange (I didn't fill out the form) it would link you, so it seemed, with an ever expanding fleecing chain.

At the minimum, these marketing firms collect names, addresses, phone numbers to resell for email addresses to use for telemarketing and spam. I'll guess that a high percentage of people who fill out these forms give accurate information because, heck, they really do want to sit by their pool and be part of the "money, cash, grow business."

KOB -- fortunately, I was able to rely on other people's research and not have to expose my own number. -- Joe

They are selling something? I can't look away from the cleavage in the lower right of the screen....

The comment on the bottom of the screen should say "stop staring at my boobs and call the number now."

why dont they put her in girls gone wild???

Thanks For The Great Information. Good Luck!

The latest version (same big cleavage, exact same script, new background) has them paying up to 12,000 dollars a month if you sell $550 worth of product...

* She must have really bad hand cramps, from writing all those checks

* I know how they make money: Volume!

I did this too. Their founders Don LaPre and Doug Grant committed suicide while awaiting trial and stood trial for murdering his wife respectively. Too good to be true? Yes. I'd love to hear Tylene Megley's post mortem on "Greatest Vitamin in the World."