December 19, 1998: Last-minute gifts in the top spot, plus Plan a Night Out and more shopping for gifts that wouldn't arrive until after Christmas.

Oh, and it's not reflected in this preview screenshot, but the House voted to impeach President Bill Clinton.

I may be conflating memories of the Starr Report or other events from the scandal, but I seem to recall being in the office for this, even though it was a Saturday. Here's the reason: The dynamic My News headline (which we don't see in this preview) worked by pulling in a bit of HTML via an include file; the HTML snippet included the text, link, and a bit of formatting.

The My News team, with their eye on the historical weight of the event, decided to pump up the font size so there was a big "CLINTON IMPEACHED" headline in the middle of the page. But previously, our managing editor had made the call that, for the AOL.com home page, we'd treat impeachement like any other news event, and give the headline the regular weight. So I worked with the My News team to remove the extra emphasis. 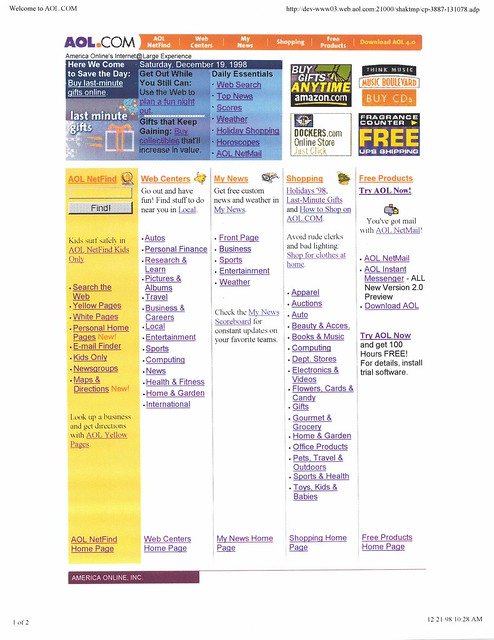